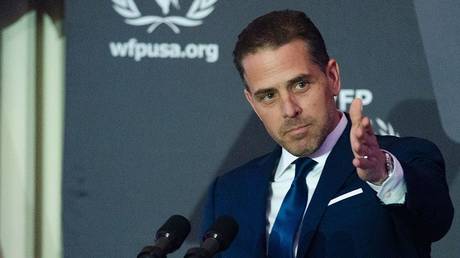 Prosecutors to decide if they want to charge the US president’s son for tax and firearm crimes File photo: Hunter Biden speaks at a World Food Program USA event on April 12, 2016. © Kris Connor/WireImage

Federal agents who have been investigating US President Joe Biden’s son Hunter have enough evidence to charge him with crimes related to taxes and a gun purchase, but the decision is up to a career prosecutor in Delaware, the Washington Post reported on Thursday citing sources.

While the IRS has been looking into whether Hunter Biden did not declare income related to his overseas business ventures – from Ukraine to China – the FBI has been investigating a 2018 incident in which he answered “no” to the question about being a drug user or addict. In his 2021 memoir ‘Beautiful Things,’ the president’s son revealed that he had in fact been using crack cocaine and other drugs at the time.

Agents “determined months ago” that they had a viable criminal case against the younger Biden, but the decision is up to the US attorney for Delaware David C. Weiss to decide whether to pursue charges, the Post reported citing “people familiar with the case.”

Weiss is a career prosecutor, but was appointed by President Donald Trump in late 2017. Trump had pointed to Hunter’s business dealings in Ukraine and the sex-and-drugs revelations from his laptop during the 2020 presidential campaign, charges which Biden and the Democrats denounced as “smears” and even “Russian disinformation.”

Stories about the laptop were suppressed on social networks in the name of “fortifying” the presidential election, but the laptop’s contents was later confirmed to be entirely authentic.

Hunter’s false statements on the gun-purchase form would normally present a problem for his father, who is pursuing aggressive gun control legislation. According to the Post, prosecutions for the offense are “relatively rare,” with 60% of the referrals resulting in charges in 2018. However, it is “not uncommon for Justice Department investigations to take years to finish,” the paper said.

Read more:   US refuses meeting between Donald Trump and Pashinyan

The Post’s anonymous sources insisted Attorney General Merrick Garland had vowed there would be “no political or otherwise improper interference” in the Hunter Biden case. Republicans have accused Garland of politicizing the DOJ over prosecutions for the January 6 Capitol riot and the September raid on Trump’s Mar-a-Lago estate.

Hunter’s attorney Chris Clark told the paper that leaking about the case itself is a federal felony and that he “had no contact whatsoever with any federal investigative agent.”

“It is regrettable that law enforcement agents appear to be violating the law to prejudice a case against a person who is a target simply because of his family name,” said Clark.

The DOJ, FBI and IRS did not officially comment on the story. (RT)