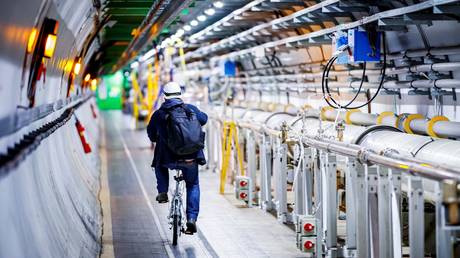 FILE PHOTO. A man rides his bicycle along the beam line of the Large Hadron Collider (LHC). ©  VALENTIN FLAURAUD / AFP

The Large Hadron Collider (LHC), a massive particle accelerator located on the French-Swiss border, is going into hibernation early this year due to European energy-saving efforts. The operator says it will still have plenty of data for analysis despite less experiment time.

Monday marks the deadline set by the European Organization for Nuclear Research, or CERN, which operates the massive machine, to pause experiments for the winter season, RIA Novosti has reported. The decision was confirmed earlier this month.

CERN draws some 200 MW of electrical power from the French grid during peak consumption in the summer, roughly a third of what the entire city of Geneva needs. But during winter, when experiments at the LHC are put on hold, the figure drops to about 80 MW. In a year, the scientific organization consumes 1.3 TWh of electricity.

The collider has a 27km ring of superconducting magnets that need to be cooled to almost absolute zero with liquid helium to control particles moving at speeds approaching the speed of light. Both the magnets and the cooling system are massive electricity consumers. The Super Proton Synchrotron, a smaller 7km accelerator that feeds particles into the LHC, is the second most power-hungry part of the facility.

Amid this year’s pan-European drive to save energy, CERN decided to shut down the LHC two weeks early. When the accelerator is brought back online again next year, the schedule of experiments will be adjusted to ensure 20% lower electricity consumption. CERN officials say scientists will nevertheless have plenty of raw data to analyze.

“For our Large Collider, it is true that there are two weeks of data that are lost,” Malika Meddahi, CERN’s deputy director for accelerators and technology, told Euronews. “However, given the amount of data that is being accumulated now and will be accumulated until 2025, the impact is less significant.”

The European energy crisis unfolded last year, partially due to lower-than-expected generation by renewable sources. It was intensified by the crisis in Ukraine due to the EU’s decision to break trade ties with Russia as part of its sanctions strategy.

Previously, Russia was the main provider of fossil fuels to the EU, according to Eurostat. In 2020, it supplied 29% of crude and 43% of natural gas imported by the bloc. (RT)