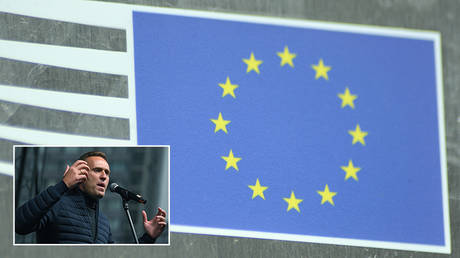 The West’s favorite Russian opposition figure has called for the EU to sanction pro-Kremlin ‘oligarchs’. Alexey Navalny doesn’t appear to be against all ‘oligarchs’ though, just those he feels are supportive of Vladimir Putin.

In a European Parliament hearing last week, the activist argued that the Russian people would welcome punishing the ‘kleptocracy’ that he says has thrived under Putin.

The anti-corruption campaigner was speaking to members of the EU’s Committee of Foreign Affairs during an “exchange of views with representatives of the Russian political opposition.” Despite the title, no members of Russia’s largest opposition parties – the nationalist LDPR, communist KPRF or leftist Fair Russia – were present at the virtual discussion. Instead only pro-Western figures, with almost uniformly similar liberal views, were involved in the event.

They included Vladimir Kara Murza Jr., a lobbyist at the US-government funded Free Russia Foundation, set up to “inform” American policy makers on the country; Vladimir Milov, a former deputy minister of energy, now closely allied to Navalny; and Ilya Yashin, a municipal deputy of the Krasnoselsky district of Moscow. Yashin is the only one of the four who actually holds an elected position.

Also on rt.com Macron’s outreach to Russia part of his De Gaulle-like plan to free France & EU partners from status as vassals of Washington

To be clear, the issue of how many Russian billionaires acquired and spent their wealth is one worth debating, yet this attempt to place Navalny on the side of the Russian people and Putin among a criminal class is simply absurd, given the history.

Putin and the oligarchs

The rise of the 1990s oligarchs is commonly referred to as a “criminal revolution” in Russia. The US-sponsored shock therapy in the post-Soviet period produced disaster privatization where the huge natural resources wealth of Russia ended up in the pockets of a handful of incredibly rich men.

The US was motivated to ensure the legacy of the Soviet Union was permanently dismantled. But the great irony is that extreme socio-economic disparity was the main reason for the Bolshevik Revolution in 1917.

The oligarchs seized control over the economy and incrementally asserted dominance over the media and the political system. Capital flight became an immense problem as the oligarchs transferred the wealth to their new residencies in the West rather than investing the money at home. Soon, this became a national security threat as the oligarchs were courted by the US and UK, which meant that Russia was heading toward a quasi-colonial status.

When Putin came to power, he announced that the primary task was to eliminate the oligarchic class. However, seizing all their assets and redistributing it was deemed too revolutionary, extreme and destabilizing. Instead, Putin argued the oligarchs would be held accountable for their crimes in the 1990s if they did not rescind their influence over politics.

Subsequently, oligarchs supporting the elected government were left alone, while the oligarchs seeking to become an alternative pole of political power were held accountable for their crimes in the 1990s. Russia’s richest oligarch with political aspirations, Mikhail Khodorkovsky, was arrested in 2003 before he could sell a major share of his oil empire to ExxonMobil and Chevron-Texaco. Western powers dutifully provided eventual exile and protection for defiant oligarchs such as Berezovsky and Gusinsky who were valued for their anti-Kremlin stance.

The US and UK were outraged that “their” Russian oligarchs were pushed out of politics, while a large portion of the Russian people was upset that all oligarchs had not been held accountable, given Russia continues to have a great wealth disparity.

Poverty reduced by half during Putin’s first term alone and a large middle class emerged. Credited for bringing Russia up from its knees and escaping external control, Putin has ever since enjoyed approval ratings that other world leaders can only dream about. However, the West never acknowledged that Putin had prevented Russia’s collapse and instead began demonizing the Russian president as an enemy of the Russian people.

The notion that Navalny and the EU will collectively support the Russian people is very flawed. In 1917, Germany brought Lenin into Russia to install a more favorable government that would pull the Russians out of the First World War. Germany’s top army commander reported to its Foreign Office that: “Lenin’s entry into Russia was a success. He is working according to your wishes.”

Indeed, the effort to “liberate” another people from their political leadership has remained the modus operandi for almost every disastrous war in the post-Cold War era. (RT)