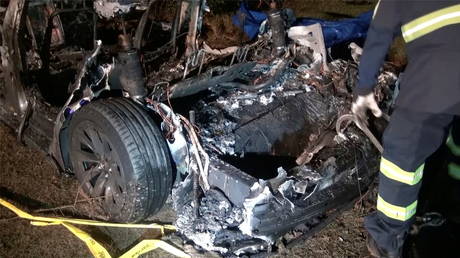 The remains of a Tesla vehicle are seen after it crashed in The Woodlands, Texas, April 17, 2021, in this still image from video obtained via social media. ©  SCOTT J. ENGLE via REUTERS

Elon Musk has sparked a row after suggesting that Tesla’s in-house checks had shown its controversial ‘Autopilot’ driver assistance feature was not responsible for a fiery ‘driverless’ vehicle crash in Texas that left two dead.

Law enforcement authorities are expected to serve warrants to the carmaker on Tuesday to secure data logs from the accident, according to a Reuters report citing a senior police source.

On Saturday night, the fully electric 2019 Tesla Model S caught fire after crashing at speed into a tree near Houston. Two passengers, neither of whom reportedly occupied the driver’s seat, were trapped inside.

After media reports pointed to the ‘Autopilot’ system as a possible cause, Musk tweeted on Monday that “Data logs recovered so far show Autopilot was not enabled & this car did not purchase FSD,” referring to Tesla’s semi-automated ‘Full Self-Driving’ system that is currently in beta testing.

“Moreover, standard Autopilot would require lane lines to turn on, which this street did not have,” Musk added. The feature is dependent on vehicle cameras to capture road markers. According to earlier reports, the car had sped off the road after failing to negotiate a curve.

Your research as a private individual is better than professionals @WSJ! Data logs recovered so far show Autopilot was not enabled & this car did not purchase FSD.Moreover, standard Autopilot would require lane lines to turn on, which this street did not have.

The carmaker has access to operational and diagnostic data from its vehicles, which are delivered to company servers at “regular intervals.” It remains uncertain whether investigators will be able to recover any logs from the event data recorder in the vehicle, which was severely burned in the fire that took four hours to extinguish.

Musk’s tweets on Monday were in response to a user’s comments that reports about the crash did “not make sense” since there were “safety measures in place with the Autopilot.”

This doesn’t make sense.There are safety measures in place with the autopilot Seat is weighted tomake sure there is a driver ,hands must be on steering wheel every 10 seconds or it disengages. Autopilot doesn’t go over the speed limits oover limit isi mpossible… Research pls

His appreciative response to that tweet elicited mixed reactions, and more questions. One user asked him whether the Autopilot feature was “ever enabled” during the ride. Another user refuted Musk’s claim about the system requiring lane markers with a video clip that appeared to suggest otherwise.

Was Autopilot EVER enabled during the duration of the drive? Big difference if it started on (somehow) & was subsequently/potentially abruptly disengaged vs “never enabled” during drive. Also, older versions allow Autopilot enabling w/o lane lines. What if they were on old ver?

Lanes are not required for basic autopilot to be maintained, so long as autopilot is activated when lanes are initially presented. pic.twitter.com/Wq1cizF17o

“Would it now be sensible for owners to wear fireproof race suits until more research is concluded? Especially as the batteries get bigger and bigger?,” asked a user who said a “car full of batteries” was a “fireball waiting to happen”.

Stuff a car full of batteries, it’s a fire ball waiting to happen, you puncture one of the Tesla batteries and BOOM💥 🔥 🔥 🔥 would it now be sensible for owners to wear fireproof race suits until more research is concluded? Especially as the batteries get bigger and bigger?

Several users defended the carmaker, with many noting that the onus was on the driver. Others labelled media coverage of the crash as biased and one-sided, with one such user claiming her “Tesla is by far the safest vehicle I have EVER owned!” (RT)