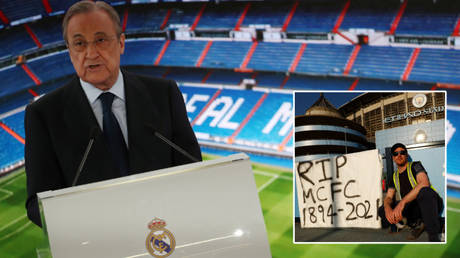 Real Madrid president Florentino Perez has been slammed for being “so out of touch” following comments made in an interview on Spanish television attempting to justify the creation of the controversial new European Super League.

Speaking on the hugely-popular El Chiringuito show, the elderly billionaire stated that the LaLiga champions are financially “ruined” after losing $482 million over the past two seasons, while $6 billion has been lost collectively between the 12 founding outfits.

Claiming that the move is being made in a bid “to save football at this critical moment”, Perez just as outlandishly said that that “young people are no longer interested in football”, putting forward ideas to shorten 90-minute matches in order to keep their attention.

In Perez’s view, the younger generation are tuning out “because there are a lot of poor quality games and they are not interested – they have other platforms on which to distract themselves.”

In response to reforms to its flagship club competition passed by UEFA on Monday, Perez argued: “If we continue with the Champions League, there is less and less interest and then it’s over.

Is he just burning down the house at this point for funzies & thinking it’s a blaze of glory?Legacy fans are stuck in the past, future fans are simple minded with a short attention span & managers & players are irrelevant & obsequious to the slave god money? What’s the goal here?

“When you have no income other than television, you say that the solution is to make more attractive matches that fans from all over the world can see with all the big clubs, and we came to the conclusion that if instead of having a Champions League we have a Super League, we would be able to alleviate what we have lost.”

Reacting on Twitter, the majority of fans were against the ESL, calling Perez “out of touch” for spouting “so much nonsense” and “utter drivel”.

“What young people is he speaking to?” one asked, while a critic noted: “He is doing the ‘millennials killed insert business’ stuff.”

Hearing the first cracks may be beginning to appear in the ugly, misshapen edifice of the ESL. Told two English clubs are close to losing their nerve.

Strong differences of opinion emerging in private between breakaway clubs. Some of execs involved believe they’re being hung out to dry & are beginning to get cold feet. They’re nervous & disappointed about way it’s been handled. One says: “This is not what we signed up for”

Another wondered: “Is he just burning down the house at this point for fun and thinking it’s a blaze of glory?”

“Legacy fans are stuck in the past, future fans are simple-minded with a short attention span, and managers and players are irrelevant and obsequious to the slave God, Money? What’s the goal here?”

Elsewhere, it has been claimed by a couple of different outlets that some of the founding clubs are getting cold feet already.

“Two English clubs are close to losing their nerve,” wrote a journalist from the Mail on Sunday, while another from Sky said that there are now “strong differences of opinion emerging in private between breakaway clubs”.

There is reportedly a feeling from some “nervous” and “disappointed” execs that they are “being hung out to dry”, and that the project and its resulting furor are not what they signed up for.

By contrast, the BBC claimed that “there is no weakening of resolve within the six English clubs who have signed up to ESL”, as the plans have “been thought through and will benefit the game as a whole”, with bosses “waiting for the storm to die down”.

It’s probably too late for a parade 🏆🥳 pic.twitter.com/qEc24zBb7l

In the Premier League, Everton have released one of the strongest-worded statements yet in criticism of the developments, saying that those behind it were “betraying the majority of football supporters across our country and beyond” while demonstrating “preposterous arrogance”.

“Six clubs acting entirely in their own interests. Six clubs tarnishing the reputation of our league and the game,” it scathed, addressing its domestic rivals who have opted to join the ESL.

Trying to lighten the mood, Wolverhampton Wanderers have altered their Twitter bio to imagine an edition of the English top flight that they would have won had the six ESL clubs gone through with their plan before then. “Probably too late for a parade,” they admitted. (RT)