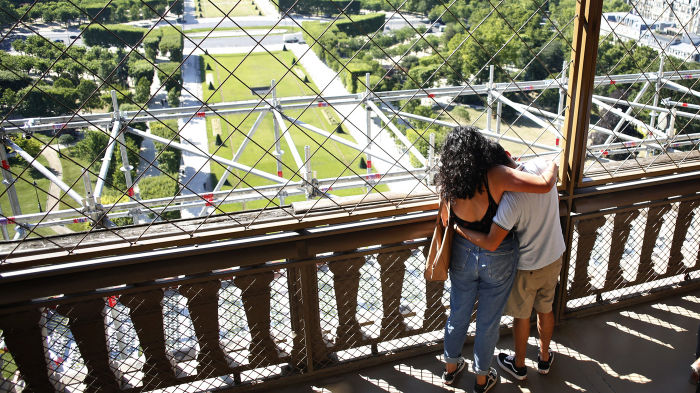 The Eiffel Tower in Paris will reopen its top level on July 15 after months of being off-limits because of the coronavirus outbreak, its operator said on Thursday, according to AFP.

The first and second floors reopened on June 26 after the monument’s longest closure since World War II, a symbolic restart as France emerged from lockdown.

“Who hasn’t dreamed of having Paris at their feet, from a height of 276 metres (905 feet)?” the tower’s operator, Societe d’Exploitation de la Tour Eiffel said in a statement on Thursday.

“This will be possible from July 15, the day of the reopening of the top floor.”

All visitors are required to wear face masks and keep safe distances from each other, with the country still recovering from an epidemic that has claimed nearly 30,000 lives.

When it reopens, the top floor will accommodate no more than 250 people at a time.

Elevators, which were off-limits for the first days after the tower reopened — meaning visitors had to climb hundreds of stairs — have since been reopened.

The Eiffel Tower usually receives about seven million visitors a year, some three-quarters from abroad.

France is one of the world’s most-visited countries but its tourism industry has taken a hard hit from the coronavirus lockdown, with hotels, restaurants, museums and theatres closed for three months.

France lifted restrictions at European borders on June 15, and the tourism industry hopes foreign visitors will start trickling in again as the summer season kicks off.

Europe is not yet allowing visitors from the hard-hit United States.

The operator said three-quarters of its visitors since reopening had been from France.