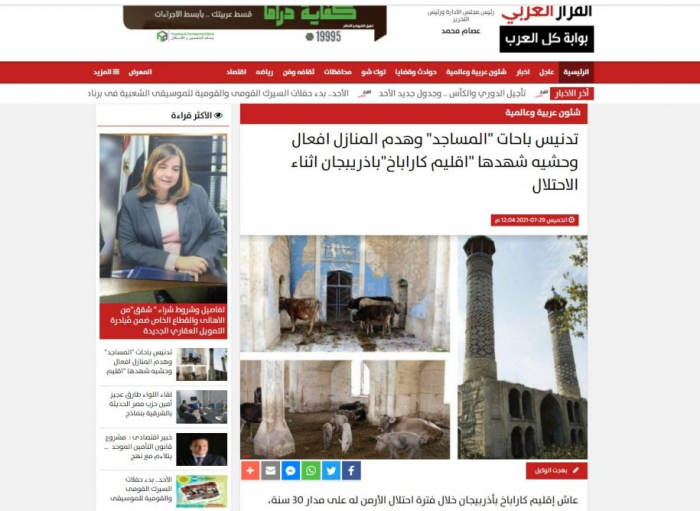 The articles by journalists Bejat Al-Vakil and Ayman Amer who visited Azerbaijan’s Aghdam district were published on the Egyptian news websites Al-Garar Al-Arabi and Al-Masry-Al-Youm.

The articles tell about the restoration work that is being carried out on the lands of Azerbaijan liberated from the Armenian occupation, as well as about the mosques desecrated and destroyed by Armenians.

Bejat Al-Vakil’s article includes the information that the “Museum of Bread” that existed in Aghdam, which has an analogue only in the UK, and the Juma Mosque, built in 1868, were destroyed by the Armenian invaders.

The author stressed the statement of the Azerbaijani president during a trip to Aghdam city that all historical and religious monuments, mosques will be restored.

Smart villages will be built in this district and a new 44-kilometer Barda-Aghdam road will be put into operation.

Read more:   WHO sends delegation to China over coronavirus

The statement made by the Azerbaijani president at a press-conference with President of the European Council Charles Michel about the end of the conflict between Armenia and Azerbaijan were quoted in another article published on the Egyptian website.

The author emphasizes that President Aliyev called for the establishment of peace in the region. In turn, Michel stressed that the European Union is ready to play a positive role in ensuring lasting peace in the South Caucasus.

Moreover, the article includes the detailed information about the Yukhari Govhar Agha Mosque and other historical and religious monuments destroyed by the Armenians.

Arabic-speaking readers were informed that Shusha city, the pearl of Karabakh region, will soon turn into one of the most important centers of culture of Azerbaijan and the Islamic world.