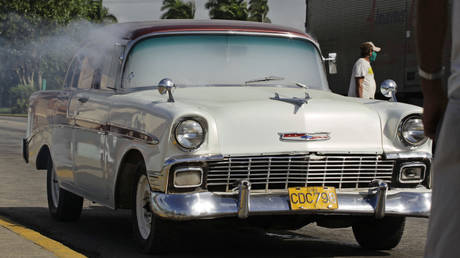 The droning noises that the US dubbed “sonic attacks” on the unwell diplomats in Havana has previously been attributed to crickets. But the mystery symptoms prompted more studies, with one now pointing to… gases that kill insects.

There might be more to the infamous story that caused a diplomatic row between Cuba on one side, and the US and Canada on the other – but it’s still not what the US government wants you to believe.

After US and Canadian personnel complained of frequent, strange grating noises and experienced symptoms including headache, nausea, hearing and memory loss during 2016 and 2017, their reports spiraled into unfounded accusations that Havana was using an unknown malicious device to “attack” the embassies. Diplomats were recalled, notes sent and diplomatic staff cut down. It went as far as President Donald Trump publicly accusing the Cuban government of ill will. Canada refrained from jumping the gun and blaming anyone for the mystery “Havana syndrome” – and it appears they were right to hesitate.

The new study, conducted by a Canadian team of researchers affiliated with the Brain Repair Centre at Dalhousie University and the Nova Scotia Health Authority, determined that the symptoms were consistent with prolonged exposure to pesticides.

The researchers have examined the Canadian “Havana syndrome” victims, including the brain of a pet dog that was in Havana during the alleged “attacks” and has since died. (RT)