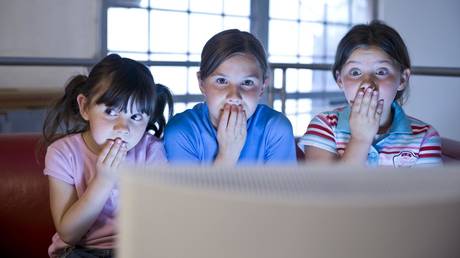 Children’s TV network Nickelodeon went silent for nearly nine minutes as a gesture of support for the Black Lives Matter movement. But pushing social-justice rhetoric on such a young audience has rubbed many the wrong way.

The channel, owned by Viacom, stopped its transmission for eight minutes and 46 seconds on Tuesday “in support of justice, equality, and human rights,” presenting children with a black screen on which the phrase “I can’t breathe” faded in and out, timed with audio of a person breathing. That spot was preceded by a promotion scrolling Nickelodeon’s “Declaration of Kids’ Rights” over an orange background and a pledge to “stand in solidarity” with “Black colleagues, creators, partners, and audiences” while condemning racism and violence.

The clip finished by urging viewers to “Join @colorofchange and countless others to call on public officials across the country to take real action,” and included a number to text for more information.

Some found it “powerful,” declaring that Nickelodeon had done more than the government and other celebrities by reaching out to young people.

A kid’s network is doing more for our country than the actual government and several big name celebrities. Thank you Nickelodeon for lending a hand in these hard and trying times. pic.twitter.com/VGzNF28imO

you’re telling me that nickelodeon is doing more than our government? wow what a time to be alive

Others were leery of leveling political messaging at kids.

What the hell are you playing at @Nickelodeon? Did you really push this out to tiny children? https://t.co/HYcpVsYivN

Turn off @Nickelodeon . They are indoctrinating our children with their social narratives. #Covid#riots

A few even suggested Nickelodeon was virtue-signaling to cover up its own misdeeds. One of its top producers was quietly let go in 2018, after years of disturbing pedophilia rumors and accusations.

I love that they’re doing this but children deserve to be protected too. They way they swept complaints about [email protected] Schneider under the rug…. But I’m schleep. pic.twitter.com/PAz6mU1xLa

However, many commenters jeered at the parents who took issue with the spot, demanding they “check their privilege and educate their children.”

Let’s be real Karen. You are not upset that #Nickelodeon scared your kid (far scarier shit on tv) you are upset your kid is now asking questions you are not equipped or comfortable answering. Imagine for a second the hard conversations black mothers have with their children.

Nickelodeon showed this on TV last night.Seen some people saying that they shouldn’t have done it because it “might scare children”.If a kids’ TV channel is the first thing to tell your child that they have rights, then I’m scared for them too. https://t.co/4XZ44WDRiw

Black kids, they reasoned, have to live with police violence – so why shouldn’t white kids suffer through a nine-minute TV spot?

I really don’t give a fuck about white children being afraid of Nickelodeon’s “I Can Breath” commercial. Black kids are being told they could get MURDERED for just being Black. Stop being a little bitch and tell Tommy why he’s watching it in the first place.

Black parents have to give their Black children “the talk” from a young age and warn them that they could be killed by police. It is white privilege that shields us from having to know this.What’s scarring is that racism is killing Black people. Be outraged about that.

The promotion also aired on MTV, Comedy Central and other Viacom channels, and in Canada, too, for some reason. (RT)