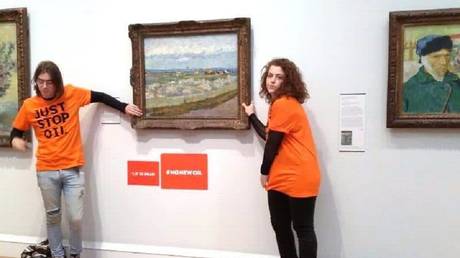 One of the guilty protesters was previously jailed for tying himself to a goalpost during a Premier League game Louis McKechnie (L) and Emily Brockbank glue themselves to Vincent Van Gogh’s ‘Peach Trees in Blossom’ at the Courtauld Gallery in London, Britain, June 30, 2022 © Just Stop Oil

Two ‘Just Stop Oil’ activists have been handed prison terms for damaging the frame of a Vincent van Gogh painting in September. Before the court found them guilty of criminal damage, one of them compared himself to civil rights leader Martin Luther King.

Emily Brocklebank, 24, and Louis McKechnie, 22, received their sentences on Tuesday, with District Judge Neeta Minhas stating that the 18th-century frame surrounding van Gogh’s ‘Peach Trees in Blossom’ had been “permanently damaged” when the pair entered London’s Courtauld Gallery and glued their hands to it in September.

“There were large areas of glue left behind and areas of solvent which had seeped into the gilding of the frame,” prosecutor Francesca Cociani told the court, according to The Independent. “Parts of the frame had fallen off.” 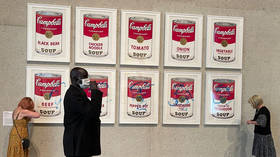 For causing just under £2,000 ($2,426) worth of damage to the frame, Brocklebank was given a 21-day prison sentence, suspended for six months, as well as a six-week curfew during which she must wear an electronic monitor. McKechnie – who is already serving a six-week prison term for cable-tying himself to a goalpost during an English Premier League match between Everton and Newcastle United – was given another three weeks behind bars.

Brocklebank told the court that she didn’t think the glue “would cause much damage,” and that van Gogh himself, as a lover of nature, would approve of their protest. Asked whether he thought the public agreed with his actions, McKechnie compared himself to Martin Luther King, arguing that the civil rights leader was “the most hated man in America” in 1960, according to Sky News.

He added that the civil rights movement “still worked,” and that “people don’t have to like what we’re doing.”

Just Stop Oil has grabbed headlines by vandalizing artworks and disrupting traffic across the UK in a bid to pressure the government into suspending fossil fuel extraction licenses. The group is financed by the Climate Emergency Fund, a foundation started by billionaire oil heiress Aileen Getty and run by Trevor Neilson, an investor with ties to the World Economic Forum and controversial philanthropists Bill Gates and George Soros.