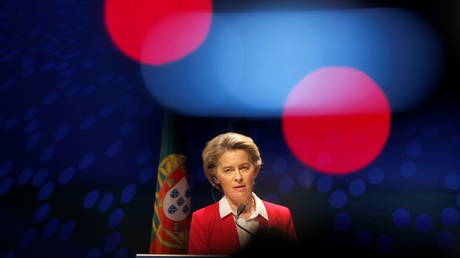 Von der Leyen sprung the idea of a “mutually recognized vaccination certificate” as a “medical requirement” for travel on Thursday in the course of praising a similar plan outlined to her in a letter from Greek PM Kyriakos Mitsotakis.

“It is a medical requirement to have a certificate proving that you have been vaccinated,” von der Leyen told Portuguese reporters.

While Mitsotakis’ plan was not meant to be “compulsory or a prerequisite for travel,” von der Leyen seemed to be leaning in that direction, repeating that “we have to have a medical requirement that proves that people have been vaccinated.” The idea of an EU-wide vaccine certificate “is a political and legal decision that should be discussed at a European level,” she continued emphatically.

Read more:   How did six migrant children die on the US border?

This was no doubt news to Europeans unfamiliar with the contents of Mitsotakis’ letter. The Greek leader wrote that it was “urgent to adopt a common understanding on how a vaccination certificate should be structured so as to be accepted in all member states,” and an EU-wide meeting is scheduled for Thursday, at which point Mitsotakis is expected to make the case for certificates “facilitating the freedom of movement of persons who have been vaccinated against Covid-19.”

“It is urgent to adopt a common understanding on how a vaccination certificate should be structured so as to be accepted in all member states,” he wrote. Greece plans to issue digital vaccine certificates to every resident who receives the jab.

Seemingly brainstorming ways to incentivize the uptake of such certificates without imposing an explicit mandate, von der Leyen suggested on Friday that they be combined with Covid-19 tests for those unable to access the vaccine in a timely fashion. Such a package would allow for greater travel to warm-weather destinations – a must for EU member states with tourism-dependent economies concerned that a second year in a row without pleasure travel will destroy them. (RT)