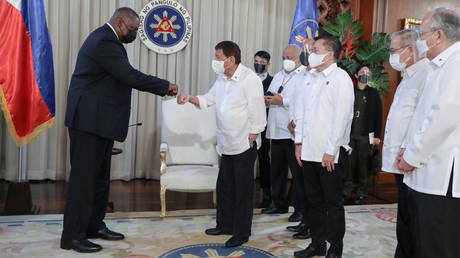 Philippines President Rodrigo Duterte agreed to retain a long-standing deal to keep US forces in the country after repeatedly vowing to end it, his defense minister said after meeting with his American counterpart, Lloyd Austin.

Defense Secretary Delfin Lorenzana announced the move on Friday, saying Duterte wouldn’t jettison the Visiting Forces Agreement (VFA) with Washington, but added that he was unsure why the president had reversed his course.

“The VFA is in full force again after Secretary Austin’s meeting with President Rodrigo Duterte,” the defense head told reporters.

Effective since 1999, the pact lays out rules for the rotation of thousands of American troops stationed in the Philippines, as well as for regular military exercises and wargames held there. Washington has come to see the VFA as more significant as it increasingly turns its sights on Beijing, with the Pentagon fielding an arsenal of warships in the region and conducting periodic ‘freedom of navigation’ missions amid a broader US push to confront the People’s Republic. (RT)