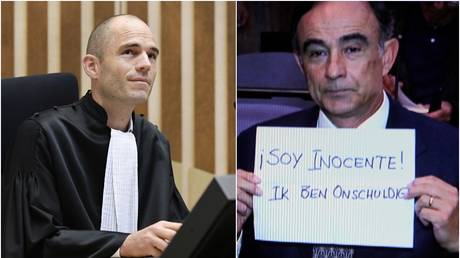 Dutch public prosecutor Ward Ferdinandusse has recently told a court how he concocted a plan to extradite a man to Argentina, where he spent eight years in prison before being acquitted. Ferdinandusse now co-leads the MH17 probe.

Ferdinandusse told a Rotterdam court that the Dutch had “initiated” an investigation into Julio Poch, a Dutch-Argentinian pilot with the country’s Transavia airline, in 2008.

The accusations against Poch stem from the remarks he supposedly made at a dinner in Bali, Indonesia, in 2003. Several co-workers claimed the former Argentinian naval aviator defended the so-called ‘death flights’ – the extrajudicial killings carried out by the Argentinian military junta in the 1970s and 1980s, during which dissidents were drugged and thrown out of planes into Rio de la Plata river and the Atlantic Ocean. “We threw them into the sea,” a drunk Poch was described as saying.

Three years later, one of Poch’s colleagues reported him to the Dutch police and the prosecutor’s office. According to Dutch news outlet RTL Nieuws, that person was not present at the dinner at which Poch had allegedly made the remarks about ‘death flights’.

Ferdinandusse said the Argentinians were keen on investigating Poch as well, because Buenos Aires was actively seeking out people responsible for human rights abuses during the junta days.

The prosecutor, who, at the time, had just recently earned criminal-law credentials, went on a trip to Argentina in May 2008, where the Dutch were given a tour of former torture cells used by the junta. An investigative judge from Argentina visited the Netherlands the same year.

Read more:   Trump to notify Congress in 'near future' he will terminate NAFTA

The investigators had only one problem: the existing 19th-century bilateral extradition treaty did not allow the Dutch to extradite its own citizens. So Fernandusse devised a plan to apprehend Poch elsewhere.

“I informed the Argentinians that we could cooperate in the arrest of Poch in another country. I pointed out that the Argentinians could ask for Poch’s movements, as per a request for legal assistance,” he said.

Ferdinandusse added that there were disagreements about whether the Dutch should share its own citizens’ travel data with Buenos Aires, so he had to write a note to ultimately convince superiors to greenlight cooperation with the Argentinians.

In 2009, Poch was arrested at Valencia Airport, Spain as he was traveling with his family and was about to make his final flight for Transavia.

Armenia fails to display its military exhibits at IDEX