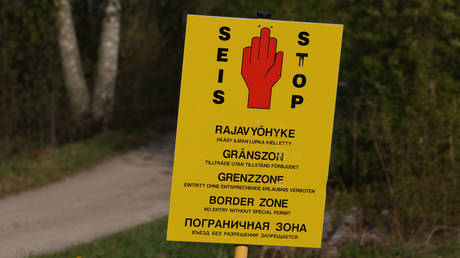 FILE PHOTO. A sign warns visitors not to proceed further near the Finnish-Russian border at Räikkölä. ©Sean Gallup / Getty Images

Helsinki’s decision to throttle the issuance of visas to Russian citizens is discriminatory, Moscow says FILE PHOTO. A sign warns visitors not to proceed further near the Finnish-Russian border at Räikkölä. ©Sean Gallup / Getty Images

Finland’s decision to dramatically decrease the number of visas it grants to Russian citizens has been noted by Moscow, which will react to the move in due course, a spokesman for the Russian Foreign Ministry has said.

The decision, which Helsinki announced on Tuesday, “fits the pattern of the Russophobic campaign in certain EU nations, which was initiated by the Baltic states,” Ivan Nechaev said during a daily briefing on Thursday.

He added that the Russian government was also aware that visa restrictions could be imposed on its citizens by the EU. The possible move was confirmed by European Commission spokesperson Anitta Hipper this week.

Russia considers such actions to be evidence that Finland and rest of the EU “are reneging on their international obligations” for the sake of “politically motivated discrimination against Russians,” Nechaev said.

“Such steps shall not be left without due reaction by the Russian side,” he added.

Ukrainian President Vladimir Zelensky called on Kiev’s allies to restrict the access of Russian citizens to their nations in retaliation for Russia’s military operation in Ukraine. He also suggested they should deport Russian nationals, including those who are critical of Moscow’s policies. All Russian citizens share collective responsibility for their government’s actions, he argued in an interview with the Washington Post earlier this month.

After facing criticism over the remark, Zelensky said Russians concerned for their safety in their home country could apply for political asylum in foreign nations. (RT)