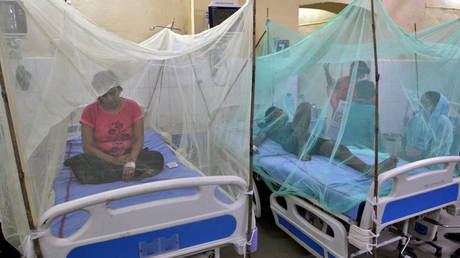 As if Covid-19 wasn’t enough, India’s northern state of Uttar Pradesh is faced with a major outbreak of dengue fever. The mosquito-borne tropical disease has already infected almost 600 people and killed dozens.

Dengue fever is spread via mosquito bites, causing skin rash, high fever, headache, vomiting and muscle and joint pains. Its severe phase can be lethal, with the World Health Organization (WHO) warning that the mortality rate of the virus could exceed 20% without proper medical care.

A vaccine against dengue fever was developed by French pharma company Sanofi Pasteur in the mid-2010s and is currently approved in around 20 countries. However, the Dengvaxia jab is only given to those who have previously recovered from the disease, or to populations in areas where the virus is endemic. The vaccine’s trials revealed that it increased the chances of severe dengue in those who had never been infected before.

The disease has become a global problem in recent decades, with between 100 million and 400 million infections registered every year, mainly in Asia and South America, according to the WHO. India had reported a multi-year low of 56 deaths from dengue fever in 2020, but it appears to be making a comeback in the country this year.

Also on rt.com Deadlier than Covid-19, but less contagious: What we know about Nipah bat-borne virus threatening to become new scourge in India

The epicenter of the current outbreak is located in Uttar Pradesh – India’s most populous state. The Firozabad area has been hit the hardest, with a total of 578 cases of dengue fever officially confirmed there over the past 30 days, according to additional director of the health department, AK Singh.

The Times of India (TOI) paper cited medical sources who claimed that around 12,000 in the area were confined to their beds with a high fever. The death toll from dengue had reached 114 people, mainly children, in Firozabad as of Sunday, according to the paper.

Government hospitals are struggling to squeeze in all the patients, with prices skyrocketing in private medical institutions, it added. (RT)