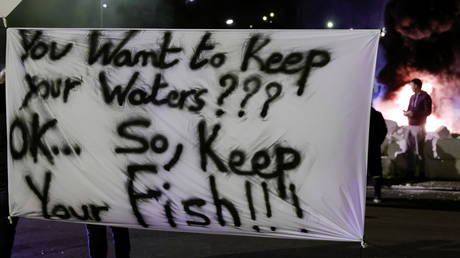 French fishermen hold a banner as they block lorries carrying UK-landed fish to protest for the slow issuance of licenses to fish inside British waters, at the fishing port in Boulogne-sur-Mer, France, April 23, 2021 © REUTERS/Pascal Rossignol

The UK prime minister’s spokesman has issued a stern rebuke aimed at the French fishing industry after groups of trawlermen in France blockaded lorries carrying UK-landed fish, protesting a lack of access to British waters.

Speaking to reporters on Friday, Boris Johnson’s spokesman described the protest actions of French fishermen as “unjustified”, after a number of lorries carrying fish landed at British ports were blocked by