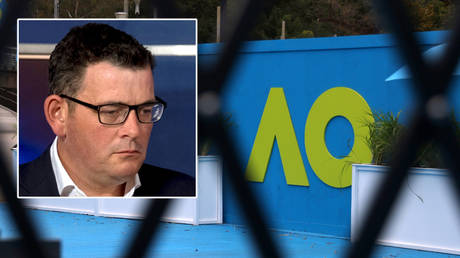 There has been a fresh twist in the tale ahead of the Australian Open after Victoria premier Daniel Andrews said he will NOT apply for exemptions for unvaccinated players – putting the participation of several top stars in doubt.

The first Grand Slam tournament of 2022 is due to begin on January 17 next but mass confusion remains as to whether a host of tennis’ biggest names will be on the bill after contradictory comments from key politicians about vaccine exemptions.

Prime Minister Scott Morrison had previously stated that that players who had yet to receive an inoculation against Covid-19 would be eligible to compete in the tournament so long as a strict, mandatory 14-day quarantine was observed.

That had appeared to provide a glimmer of hope for players such world number one Novak Djokvovic, who has been the subject of several headlines about his vaccine status despite the Serb refusing to confirm or deny whether he has received the jab.

If you’re fully vaccinated – a lot more is about to open up for you.Gyms and retail in metro Melbourne will reopen for fully vaxxed. Hospo, retail, health and beauty services will be open – with no capacity limit indoors and a cap of 500 outdoors. Density limits still apply.

Once we reach 90% fully vaccinated – maybe as soon at 24 November – all major restrictions will ease and we’ll get back to something resembling our pre-COVID lives.

Djokovic is hunting a fourth successive Australian Open title that would be his tenth in total; a win which would stand him along at the summit of the sport with 21 Grand Slam wins – one more than rivals Rafael Nadal and Roger Federer.

But judging by the latest comments from Victoria premier Daniel Andrews, Djokovic’s pursuit of history may be over before it has begun.

I pray that unjabbed Tennis players boycott the 2022 Australian OpenTeach that psychopath @DanielAndrewsMP a lesson… you can bully, threaten, vilify and segregate your own people.. but we are not Australian and we do not accept this behavior as an international citizens.

THANK YOU @DanielAndrewsMP for clearly stating that Tennis players for the Australian Open are NOT GETTING EXEMPTIONS!Fab LEADERSHIP 👏

“If we don’t apply for an exemption, then no exemption will be granted and then the whole issue is basically resolved.”

Earlier this week, an email sent to WTA players was leaked to the media which stated that it was likely that unvaccinated players would be granted permission to compete in the tournament, with rules for entry set to “improve significantly”.

Andrews, whose role as Victoria premier oversees the rules for Melbourne, the host city of the event, has appeared to draw a line through that particular statement and replaced it with a ‘no-tolerance’ policy for unvaccinated players.

Recent reports have suggested that as many as 35% of the men’s tour remain without vaccination – similar data is not available for the women’s tour – meaning that next year’s tournament bracket might just take on an entirely different feel to previous years.

Entry guidelines to Australia remain strict as the country continues to grapple with Covid-19 infections despite Melbourne opening up a week ago. However, restrictions remain in place for unvaccinated citizens meaning that they are aren’t permitted to attend bars, restaurants and sporting events.

According to Andrews, these same rules must apply to tennis’ top stars even it it means that the legitimacy of the tournament is threatened.

“I’m not going to require people sitting in the grandstand, people working at the event, to be vaccinated while players aren’t,” he said.

“I am not intending to control the borders, we do not… We will host the event but we will not be applying for an exemption for unvaccinated players to come here. And that is the only fair thing to do. We have all achieved amazing things.” (RT)