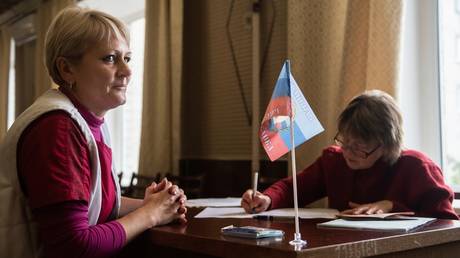 A woman at the exit voting in the Lugansk Republican Clinical Hospital at the referendum on the entry of the Lugansk People's Republic into the Russian Federation. ©  Sputnik/Valery Melnikov

The republics previously recognized by Moscow have opted to join Russia, based on preliminary polls A woman at the exit voting in the Lugansk Republican Clinical Hospital at the referendum on the entry of the Lugansk People’s Republic into the Russian Federation. © Sputnik/Valery Melnikov

The majority of citizens of both the Donetsk and Lugansk People’s Republics (DPR and LPR) have supported the idea to unite with Russia, according to local election commissions.

In DPR, more than 98% of voters supported the idea to join Russia, according to early official figures. The referendum in LPR yielded a similar result, with more than 97% of voters supporting the potential reunification. In Lugansk, all the ballots have been already counted, according to local authorities, while Donetsk, so far, has processed just over a half of votes.

The polls were conducted in the republics, as well as in Moscow-controlled parts of Ukraine’s Zaporozhye and Kherson regions, between September 23 and 27.

Both republics, which broke away from Kiev in the aftermath of the 2014 Maidan coup and the conflict in Ukraine’s east that followed, have shown a turnout of over 80% for the referendums, official figures show.

Ukraine and its Western supporters have already rejected the referendums on joining Russia as a “sham” ballot, vowing to not recognize the results regardless of their outcome. Ukrainian President Vladimir Zelensky warned that completion of the referendums by Russia would “make it impossible, in any case, to continue any diplomatic negotiations” with Moscow.