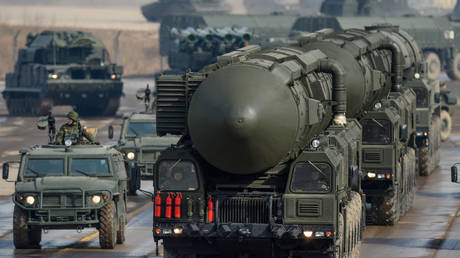 Fire any ballistic missile at Russia, and Moscow might respond with a nuclear warhead. That’s according to the Russian Defense Ministry, which has publicly disclosed its conditions for launching a nuclear strike.

“Any attacking missile will be treated as a nuclear-equipped missile. Information about the launch of an automatic missile will be communicated to the country’s top leadership, which, depending on the situation, will determine the scale of the nuclear forces’ response,” wrote Andrey Sterlin, a member of Russia’s General Staff and Alexander Khryapin, a top military scientist, in the Defense Ministry’s newspaper Red Star. (RT)

On September 27, 2020, the telephone conversation took place between Foreign Minister Jeyhun Bayramov and…

President of Azerbaijan Ilham Aliyev has signed a decree on introduction of a martial law.…

On September 27, with the initiative of the opposite side, the telephone conversation took place…

Azerbaijan’s Defense Ministry: The enemy is fleeing the battlefield leaving combat vehicles behind

As a result of the counter-attack operation of the Azerbaijan Army units, enemy troops retreated…