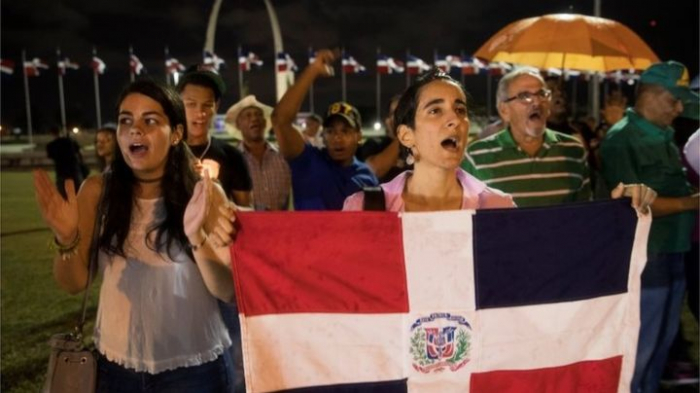 Hundreds of Dominicans took to the streets on Saturday night in fresh protests after the abrupt suspension of municipal elections that unleashed a political crisis months before the Caribbean island votes for a new president, Reuters reported.

The protests started after the electoral institute on Feb. 16 suspended a nationwide election four hours after voting began. The authority said about half of the machines used in the most populated municipalities to cast votes electronically had failed.

“We came to take out the garbage,” read one banner, carried by a group of masked students in front of the electoral institute in Santo Domingo. Across the country, protesters have demanded the resignation of the institute’s officials and an investigation.

“I’m tired of them always treating us like we’re stupid,” said Melina Adames, who, like many who took to the streets, was dressed in black to mourn the death of democracy. Others were hitting cauldrons in a traditional form of protest.

Dominicans will vote for a new president on May 17. In an attempt to stem the protests, the government asked the Organization of American States (OAS) earlier this week to help investigate the ruling that led to the suspension.

The OAS said on Friday that while there was no evidence to suggest the machines had been manipulated, it was committed to finding a solution for the problems.

Even before the municipal election, opposition politicians had challenged the use of automated voting machines, which the government acquired last year for $19 million, arguing that its software could be manipulated.

The Ministry of Emergency Situations is disinfecting various areas of Baku