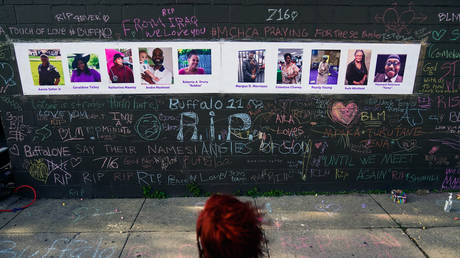 FILE PHOTO: A makeshift memorial near the shooting scene at a supermarket in Buffalo, May 19, 2022 ©  AP / Matt Rourke

Democrat proposal to expand domestic terrorism powers gets no Republican support in US Senate FILE PHOTO: A makeshift memorial near the shooting scene at a supermarket in Buffalo, May 19, 2022 © AP / Matt Rourke

A Democrat proposal to create a special task force for hunting down “white supremacists” in the US military and federal law enforcement agencies failed in the Senate on Thursday, after no Republicans voted for it. The ruling party invoked the recent mass shooting at a Buffalo, New York supermarket to argue such enforcement was necessary.

An 18-year-old killed 10 people and wounded three more on May 14, in the attack the authorities say was racially motivated.

The Domestic Terrorism Prevention Act would have set up an interagency task force within the FBI and the Departments of Justice and Homeland Security to analyze and counter white supremacist infiltration in the military and federal law enforcement.

“The bill is so important because the mass shooting in Buffalo was an act of domestic terrorism,” Senate Majority Leader Chuck Schumer (D-New York) said on the floor ahead of the vote. “We need to call it what it is, domestic terrorism. It was terrorism that fed off the poison of conspiracy theories like white replacement theory.” (RT)