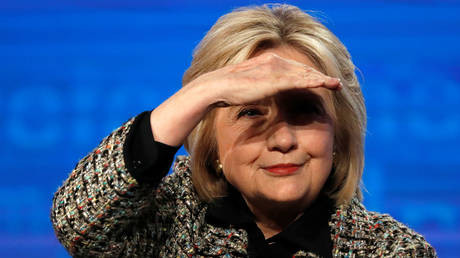 Biden and Putin met in Switzerland on Wednesday to discuss matters including foreign policy, climate change, the Covid-19 pandemic, and cyber security, during a summit both men hope will thaw the chilly relationship between the two countries.

Not everyone wants that relationship thawed, however. Former Secretary of State Hillary Clinton, one of the loudest voices behind the disproven conspiracy theories about Trump-Russia “collusion” and allegations of “hacking” that plagued the aftermath of the 2016 US election, emerged that same day on MSNBC’s Morning Joe to declare anyone who dared to question the results of the 2020 vote to be “doing Putin’s work.”

Also on rt.com Biden wants NATO to project the strength it doesn’t have

Calling the Russian leader “the great disruptor,” Clinton – who now holds no political position, whether appointed or elected – began making demands of Moscow, blaming “Vladimir” for “letting cybercriminals attack our infrastructure” and threatening “even more serious consequences” should Russia fail to bend the knee to Biden.

“Let us tell you what we are no longer going to abide, and there will be consequences, and don’t test us,” she said Biden would warn Putin, continuing: “Let’s make sure you understand the United States is back, we are not going to be endangered and undermined by people who for whatever combination of reasons look to you because you’re an authoritarian and they in some way like that, or wish they were.”

While she didn’t elaborate on what sort of “consequences” would befall Putin if he didn’t do as he was said, she suggested “lay[ing] down some markers with Putin and then follow[ing] up with them.”

Apparently seeing no irony in one of the highest-profile Russiagate true believers accusing anyone who dares to replicate her behavior four years later of sowing discord, Clinton insisted those who would question the 2020 results were doing so “to sow distrust, to sow divisiveness, to give aid and comfort to those in our country who, for whatever reason, are being not only disruptive but very dangerous.”

With Putin expressly hoping that the Geneva summit might put an end to the knee-jerk, blame-placing reactions that emerge from the US whenever someone needs to be blamed for “election interference” or “cyber attacks”, Clinton is picking the most inconvenient time to come rushing to the rescue of American democracy. (RT)