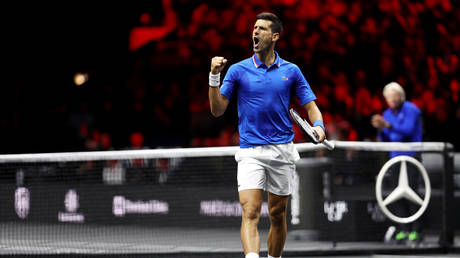 Novak Djokovic will play his first final since winning Wimbledon in July after beating Roman Safiullin in the semifinal of the Tel Aviv Open on Saturday.

He dropped just three points behind serve in a near-faultless first set, but his opponent raised his game in the second.

Djokovic was serving for the match with the score at 5-4 at one point in the second set, but Safiullin’s resilience resulted in a tie break.

Hanging on to complete his third victory in straight sets in Israel this week, though, Djokovic rallied through to wrap up the semi-final tie in 95 minutes.

“I think it was a very competitive match, especially in the second set,” Djokovic said post-match.

“I must say I was quite emotional on the court today in the second set, there was a lot of tension, and that was also due to his aggressive style of tennis. Big serves, and when he has time, he’s so solid from the forehand and backhand corner.”

“I knew that I had to stay very strong, and that he was definitely going to raise his level in the second set, which happened.”

“I was serving for the match and played a couple of loose points, but credit to him for fighting back. It was an enjoyable evening on the court for sure,” Djokovic added.

Read more:   Has Saudi Arabia learned from its past oil gambling mistakes?

The Tel Aviv tournament is Djokovic’s second since Wimbledon due to his unvaccinated status leaving him unable to enter the United States to play the US Open at Flushing Meadows, which was won by Carlos Alcaraz last month.

He played the Laver Cup in London last weekend, which provided the setting for generational rival Roger Federer’s farewell from professional tennis, and will now take on second seed Marin Cilic of Croatia on Sunday, who beat Constant Lestienne from France 7-5, 6-3 in the other semifinal. 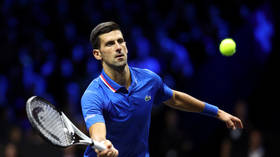 Sunday’s final in Tel Aviv will give him the chance to win a third tour-level tournament in 2022 after triumphs at Wimbledon and the Italian Open on clay in May. (RT)

Crossdressing comedian Eddie Izzard, who identifies as a woman, will reportedly play the titular sleuth…