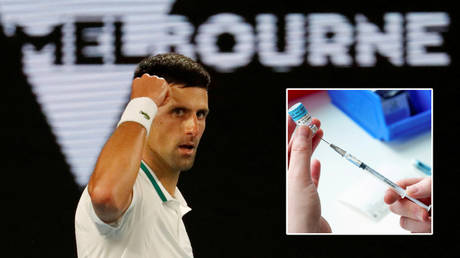 Novak Djokovic says people are “taking the liberty” to ask questions about vaccine status and “judge a person”, speaking as an Australian head of government warned that unvaccinated players will face a struggle to receive visas.

World number one Djokovic has repeatedly expressed his reservations about players being pressured to take a Covid jab, and the reigning Australian Open champion insists his decision is a “private matter” amid a string of controversies surrounding the likes of NBA star Kyrie Irving, who has been left out by the Brooklyn Nets because he is not vaccinated.

Djokovic rival Stefanos Tsitsipas found himself at the center of a political row after he made a wide range of remarks about Covid and vaccines, and the Greek – whose own government seemed to distance themselves from views which appeared to include a suggestion that spreading the virus could have positive effects – now appears to be willing to be vaccinated.

Russian contender Andrey Rublev has become the latest player to drop their apparent reluctance because of the logistical issues not being vaccinated could cause, but Djokovic is yet to openly say he has had the treatment.

The sixth racket of the world, Andrei Rublev, will be vaccinated against the coronavirus to compete in the Australian Open Grand Slam series early next year.

“Things being as they are, I still don’t know if I will go to Melbourne,” Djokovic told Blic, speaking ahead of a first Grand Slam of the year in January which is likely to take place under tight restrictions.

“I will not reveal my status, whether I have been vaccinated or not – it is a private matter and an inappropriate inquiry.

“People go too far these days in taking the liberty to ask questions and judge a person.

“Whatever you say – ‘yes, no, maybe, I am thinking about it’ – they will take advantage.”

Daniel Andrews, the Premier of the state of Victoria, has reiterated how difficult it could be for unvaccinated stars to travel to the country, explaining that they may not be allowed in.

He’s being singled out because he has not once said he will change his mind. Tsitsipas, Rublev and Medvedev have already said they’ll get vaccinated to play. That’s why. https://t.co/oiajcjzM7f

“I don’t think an unvaccinated tennis player is going to get a visa to come into this country,” predicted the politician.

“If they did get a visa, they’d probably have to quarantine for a couple of weeks when no other players will have to.

“I don’t think any other tennis player or golfer or Formula One driver will even get a visa to get here.

“Professional sport is part of that authorized worker list and they have to be double-dose vaccinated.”

World number six Rublev sounded a realistic note on the risk of the kind of quarantine that many players endured at last year’s tournament.

Also on rt.com Novak Djokovic warned his ‘Grand Slam titles won’t protect him’ from Covid-19 as vaccine row rages ahead of Australian Open

“The situation with Australia is such that if the players want to participate without quarantine, they must be vaccinated,” he said, having effectively admitted in March that he would not choose to be vaccinated unless it conferred a “privilege”.

“If you don’t get the vaccine, then just sit in the room for two weeks and that’s it.

“In my case, I’ll get vaccinated. And whoever doesn’t want [it], I think, will miss the tournament.”

The Australian government could take the exact requirements for athletes out of the state authority’s power.

Also on rt.com ‘It would be great if more players got vaccinated’: Tennis ace Murray backs ‘very strict’ Australian government rules for unjabbed

“Of course I want to go,” said Djokovic, discussing his potential attempt to win the trophy for a fourth successive edition.

“Australia is my most successful grand slam tournament. I want to compete. I love this sport and I am still motivated.

“My manager, who is in contact with the Australian tennis federation, tells me they are trying to improve the conditions for everyone – both for those who have been vaccinated and those who have not been.” (RT)