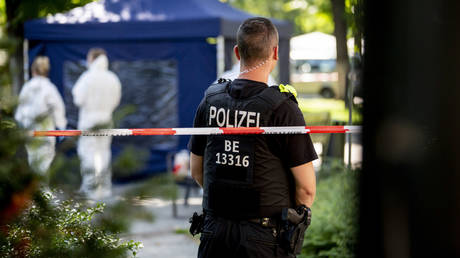 FILE PHOTO: A good three months after the murder of a Chechen man in Berlin, the Prosecutor General has taken over the investigation © Global Look Press / DPA / Christoph Soeder

Germany seems to be joining the cohort of those playing the old-time blame-Russia game, having expelled two diplomats citing Moscow’s unwillingness to help probe a murder of a suspected terrorist on its soil.

On a sunny day in August, Zelimkhan Khangoshvili – formerly a Chechen militant suspected of terrorist activity in Russia and a Georgian national – set off for his last walk through the Kleiner Tiergarten park located in one of Berlin’s central boroughs. Not long after that, he was shot dead in broad daylight by an assassin who allegedly used a silenced pistol to do the job.

The high-profile murder case returned to the spotlight when Berlin made a bold move expelling two Russian diplomats.

The official rationale was that “we’ve not seen that Russia backs us in inquiring into the murder,” as Chancellor Angela Merkel mildly put it. Germany’s Foreign Office, on their part, echoed Merkel’s points but stated that “serious and immediate participation by the Russian authorities is still required.”

Russia’s Foreign Minister Sergey Lavrov said Moscow was surprised by Berlin’s accusations, telling the press he couldn’t comprehend what led Germany to believe Russia was involved in the killing.

We have communications channels set up for our law enforcement agencies … these should be used. If our German partners claim that Russia doesn’t cooperate enough, I don’t know what that assessment is based upon.

The Prosecutor General’s Office that took over the probe claimed of having “sufficient factual evidence that the killing may have been ordered by state authorities of the Russian Federation or the autonomous Republic of Chechnya which is a part of Russia.” They have not revealed any details.

Berlin was “absolutely reluctant” to deteriorate its relationships with Russia which “are not in as good shape as they ought to be,” according to political analyst Dr. Werner Patzelt. Thus, he believes expelling the diplomats “was something like a final resort” to make Moscow co-operate.

But the fact that no evidence was presented made some German politicians very uneasy.

“That the federal government singles out two Russian diplomats, although the investigation is still going on, is difficult to understand without having clear information,” said Alexander Lambsdorff, vice-president of the Free Democrats’ (FDP) parliamentary group.

The media immediately started making comparisons with the Skripal poisoning saga over the Russian connection. There’s one similarity with the British case – there was no evidence presented to the public, but the blaming started immediately. (RT)