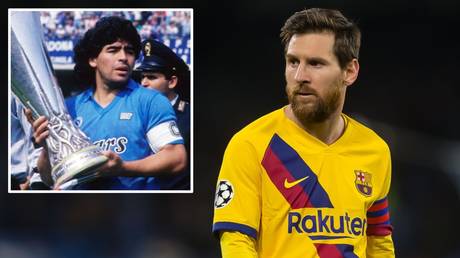 Diego Maradona and Lionel Messi are arguably the two finest Argentinian footballers in history, but the World Cup-winning legend said Messi would struggle to match the impact he made on the Italian game.

Maradona, who almost single-handedly dragged Argentina to their 1986 World Cup win, has long been considered one of the game’s greats. But his status as his country’s best-ever footballer has been under threat from the incredible exploits of Messi over the past decade or so.

The Barcelona magician has enjoyed tremendous success during his glittering career, winning five Ballon d’Or awards and numerous trophies with his club. But greatness on the international scene has so far eluded him.

Messi’s impressive goalscoring form has continued this season, with the Barca No.10 scoring 23 times in 29 appearances across all competitions, but his impact hasn’t been the same on the European stage, with just two goals so far in this season’s UEFA Champions League.

Messi once again went goalless during his team’s 1-1 Champions League draw against Napoli this week and Maradona, who represented both clubs during his career, says that Messi wouldn’t be able to match his exploits in the Italian game if he was to join Cristiano Ronaldo by making the switch from La Liga to Serie A.

With Covid-19 infections climbing, Washington has diverted shipments of vital protective masks from its allies…

Bill Withers, singer of ‘Ain’t No Sunshine,’ dead at 81

Bill Withers, a soulful singer best known for the 1970s hits “Lean on Me,” “Lovely…

No vaccine or treatment has been found yet to treat the novel coronavirus disease, which…

EU to fly home another 250,000 nationals stranded by coronavirus

More than 250,000 European Union citizens are still trying to get home, as the number…

175 Azerbaijani citizens more evacuated from Istanbul and London to country

On April 3, the charter flight was implemented to Baku by Azerbaijan Airlines CJSC and…

With France reeling from the Covid-19 pandemic, the head of the Paris police force has…