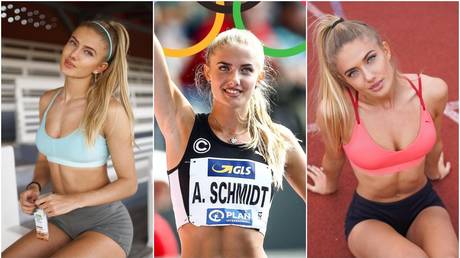 Olympic fans have questioned the contribution of German track athlete Alica Schmidt to her team at the Tokyo 2020 Games, as despite the 22-year-old’s voluminous social media output, she hasn’t featured yet in any discipline.

Schmidt qualified as part of Germany’s 400m relay team, but her debut dream was dashed when was benched for Saturday’s mixed event. Nevertheless, Schmidt wouldn’t have seen action as the German team was disqualified for making contact with the Jamaican team.

Despite inactivity, one place Schmidt has been active is on social media keeping her army of admirers updated on her ever movement in Japan.

The German’s 2.3 million Instagram followers were garnered due to the attention from an Australian magazine article dubbing her the ‘World’s Sexiest Athlete’, although their arbitration was backed up by popular opinion.

Her crowd on that platform are kept happy with infrequent selfies and photo sessions, but her 419,500 Tik Tok fans have been treated to daily insights and updates with snippets of Tokyo life from touchdown to track training.

And they have become more cynical of what they’re seeing and have implied Schmidt is freeloading in Tokyo.

Schmidt posted a video showing off her Germany track vest and pants in a video titled “dreams can come true” but many have so far come to the conclusion Schmidt has been selected by Team Deutschland to promote the Olympics through her undoubted good looks and throngs fo followers rather than compete on merit.

“Confused. What are you even doing? Your videos are showing a lot of posing which is cool, but I cannot see your event anywhere,” one follower said. “Didn’t realise being hot was a sport,” said another.

“Isn’t this the Olympian who has just been sitting in the stands and hasn’t competed? Beauty contest ain’t an Olympic sport,” one more chimed in.

One of the most recent videos from Schmidt was ‘Tokyo 2020 Presents’, where she showed off her haul free stuff from Asics trainers and athletics clothes, to Samsung phones and headphones, snacks and cola all for gratis as well as a look around the Olympic village.

The top comment to the clip read: “Enter Olympics to win X. Enter Olympics for free stuff” and has gained 118,00 likes so far indicating some level of agreement with that opinion from her followers.

“You are on social media all day.. how do you focus,” another wrote in the comments, while another compared Schmidt to another good-looking athlete in Russian tennis player Anna Kournikova: “This is like Anna Kournikova saying she was a champion tennis player. She was no good.”

Schmidt did explain her strength routine to prove to followers she does train and her summer in the land of the rising sun isn’t all about bagging freebies from sponsors.

“About 30 percent of my training is focused on strength. For the most part, explosive and functional full-body exercises are on my schedule,” she explained.

“It’s super effective, strengthening and activating the leg muscles, the classic way with squats and lunges. There are then seven to eight training sessions a week that last between two and three hours.”

Schmidt’s own mantra, listed on her official Olympic profile, takes aim at those who criticise others, promoting cherishing their accomplishments instead of jealousy.

“Cherish other people’s success instead of being jealous of what they have accomplished. Your values, beliefs and expectations form your attitude. Bring on everything ahead and set your standards high,” she is quoted as saying.

The Worms-born blonde can still make her long-awaited Olympic debut, by being selected for the women’s 4x400m relay on Friday, but her chances are expected to be slim. (RT)