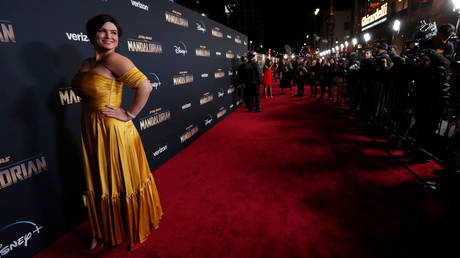 Actress Gina Carano, who was infamously expelled by Lukasfilm over her social media posts, has spiked the curiosity of her fans with an image that may or may not indicate her return to the galaxy far far away.

Carano portrayed Cara Dune in two seasons of the popular Star Wars series ‘The Mandalorian’ before her controversial banishment from the franchise. On Tuesday, she posted an image on her Twitter account that one can easily find befitting the space opera universe. It shows a solitary silhouette in a rocky landscape, with three suns hanging in the sky.

While Carano offered no context for the image, many commenters took it with cautious optimism, perceiving it as an indication that the actress and her character may somehow return to the Star Wars universe.

Not sure what this is, so I’m going to assume it’s a clue that we’re getting a Cara Dune origin story🤞🤞🤞

THREE suns? Is this TatThreeIne?

Did Disney come to their senses yet?

The Disney-owned studio cut ties with Carano under pressure from the Left over her social media postings. She listed “beep/bop/boop” in her Twitter bio, which she said was a satirical retort to those who demand people list their “prefered pronouns.” She mocked the way wearing a medical mask became a way for virtue signaling in the US. And she also warned how the rise of hatred over political affiliations paved the way to fascism. Critics took such incidents as examples of transphobia, Covid-19 denialism and anti-Semitism respectively.

The mysterious image she posted is not original Star Wars work however. It was made by digital artist Stuart Lippincott and is called ‘In The Light’. The description says: “The light washed over her. Her purpose was revealed.” (RT)