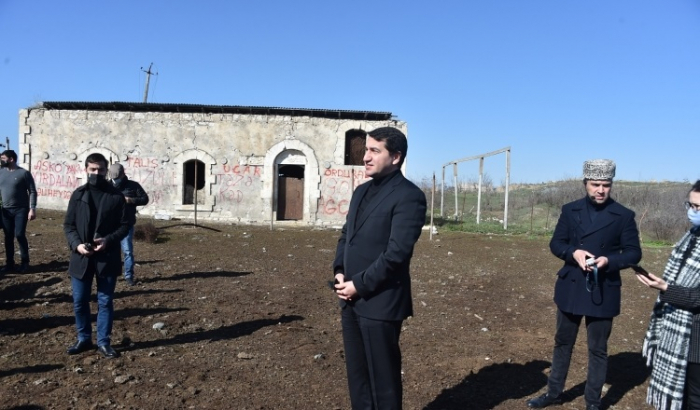 The destruction and desecration of mosques are unacceptable in all religions, said Hikmet Hajiyev, Assistant to the President of Azerbaijan, informing foreign diplomats about the destruction caused by Armenia.

On Saturday, representatives of diplomatic corps accredited in Azerbaijan and military attachés started their visits to the Azerbaijani territories liberated from the Armenian occupation.

“One of the main reasons why we visited the village of Mardinli is to show, along with the destruction of the village, the destruction of a historical mosque in this village. As in other occupied territories, here we see that this mosque was used as an animal stable,” Hajiyev said, describing all this as an ‘act of vandalism’.

He noted that like other areas, the territory of this village was massively contaminated with infantry and anti-tank mines.

“Demining operations are underway. However, over 50 Azerbaijani civilians and servicemen have become victims of the mine explosions since the signing of a trilateral statement on November 10, 2020,” Hajiyev added.