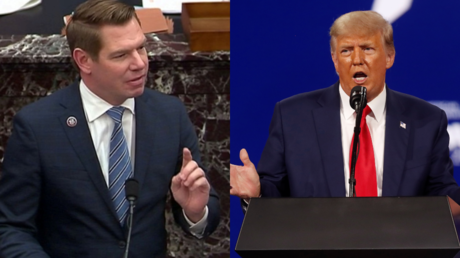 Rep. Eric Swalwell has sued Donald Trump and his allies over “emotional distress” sustained at the Capitol Hill riot. The suit also claims that Swalwell stripped down and prepared for “hand-to-hand combat” with the rioters.

In a civil lawsuit filed in Washington, DC, on Thursday, Swalwell (D-California) alleges that former President Trump, along with his son, Donald Jr., Rep. Mo Brooks (R-Alabama), and lawyer Rudy Giuliani, are directly responsible for causing him “severe emotional distress,” namely by encouraging rioters to march to the US Capitol after speeches outside the White House on January 6.

The meandering 65-page suit alleges that Trump and his allies engaged in “conspiracy to violate civil rights,” “neglect to prevent interference with civil rights,” “incitement to riot,” “inciting assault,” “disorderly conduct,” and “terrorism.” In addition, Trump and his associates inflicted “severe emotional distress” on Swalwell, who was inside the House chamber certifying the results of the 2020 election as the rioters entered the building.

One bizarre paragraph in the suit claims that Swalwell “prepared himself for possible hand-to-hand combat as he took off his jacket and tie and searched for makeshift instruments of self-defense.”

“As the Plaintiff watched this horror unfold, he texted with his wife in what he felt could be his last moments, telling her ‘I love you very much. And our babies,’” the description of Swalwell’s apparent ordeal continued. (RT)