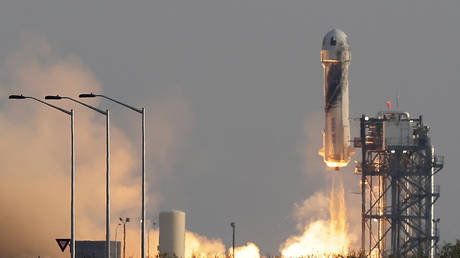 While some observers may have pondered the wonder of a billionaire flying into space, the suborbital venture by Amazon founder Jeff Bezos triggered US Representative Earl Blumenauer (D-Oregon) to call for taxing such travel.

“Space exploration isn’t a tax-free holiday for the wealthy,” Blumenauer, a senior member of the House Ways and Means Committee, said in a statement on Tuesday.

Just as normal Americans pay taxes when they buy airline tickets, billionaires who fly into space to produce nothing of scientific value should do the same, and then some.

The Oregon politician’s proposed tax, which he calls for in a bill named the Securing Protections Against Carbon Emissions (SPACE) Tax Act, would seem to fit with a typical Democrat strategy of exploiting class tensions. Bezos, who ranks as the world’s richest person, and Branson had already drawn criticism for using their wealth to fly into space, rather than invest in ways that help people. The Amazon founder riled critics further when, upon returning to earth, he thanked employees and customers by saying, “you guys paid for all this.” (RT)

“Both in official documents and on the website of the President of Ukraine, Azerbaijan is…