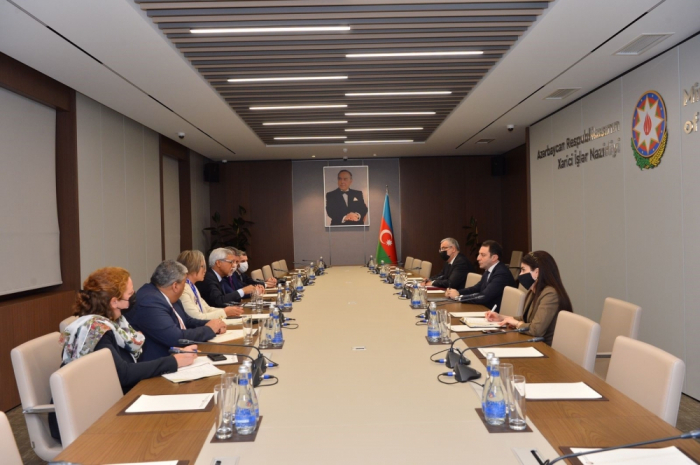 The Deputy FM thanked the head of IFRC for the humanitarian assistance to Azerbaijan in the 1990s, as well as for its support in strengthening the Azerbaijan Red Crescent Society, a member of the Federation. Informing the delegation about the violations of international humanitarian law committed by Armenia during the 44-day Patriotic War, the Deputy Minister stressed that the deliberate targeting by Armenia of the Azerbaijani settlements located far from the conflict zone is a serious violation of humanitarian law.

The hope was expressed that the resumption of the activities of the Federation’s representative office in Azerbaijan last year would further strengthen cooperation between the organization and the country, in particular, it was emphasized that this cooperation can contribute to the restoration of the territories liberated from the occupation to ensure the safe and dignified return of IDPs to their native lands.

The Secretary General noted that he was greatly affected by the scale of the destruction he saw in Aghdam. He noted that Azerbaijan is a rapidly developing country, and from this point of view, it is important that the national society develops in accordance with this pace, and that the Federation will spare no effort to further strengthen the Azerbaijan Red Crescent Society, and will continue to provide humanitarian support to the population affected by the conflict.

During the meeting, the sides discussed the international efforts of Azerbaijan in the fight against the COVID-19 pandemic, draft resolutions on equitable distribution of vaccines and combating vaccine nationalism put forward by Azerbaijan, as chairman of the Non-Aligned Movement, in the UN Human Rights Council and the General Assembly. The Secretary General praised Azerbaijan’s efforts towards equitable distribution of vaccines around the world.