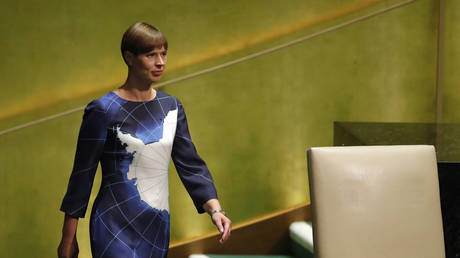 During a trip to neighboring Latvia, Estonian President Kersti Kaljulaid has urged European diplomats to pursue more constructive relationships with Moscow, insisting that doing so need not be at the expense of their ‘values’.

In an interview with the local LTV news channel, reported by Russian media on Thursday, the Estonian politician insisted that when it comes to Russia, “being involved doesn’t mean abandoning your principles.”

“I am in favor of dialogue,” she said, “but in it, you need to be firm and give a clear message. This is our common task – to take on these difficult issues.” At the same time, Kaljulaid is quoted as saying, “the more Western neighbors engage with Russia as it is, the more they will understand it.”

“We need to cooperate. For example, we support the fact that the EU, together with Russia, needs to conduct border checks. Likewise, we will willingly host Russian students so that they can see what life is like in the Free World [sic].” However, would-be exchange students might decide to bide their time before booking tickets to Tallinn. Estonia is currently under a strict Covid-19 lockdown, while Russia has already mostly abandoned restrictive measures to control the pandemic as case numbers tumble. (RT)