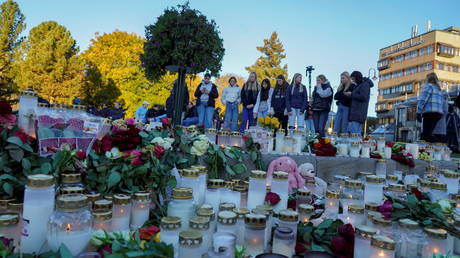 People lay down flowers and light candles to honor the dead at Stortorvet in Kongsberg, Norway on October 15, 2021. © Reuters / NTB / Terje Bendiksby

Mental illness remains the main driver behind the deadly bow-and-arrow attack in Norway, police have said. While the suspect is being held in a psychiatric institution, other motives, including terrorism, have not been ruled out.

“We work with several hypotheses. They are weakened and strengthened during the investigation,” police inspector Per Thomas Omholt said during a press conference on Friday. “We will find out what has happened, and why it has happened.”

The hypothesis that has been strengthened the most in the first days of the investigation is that the background is illness.

The investigators are also probing other motives, including “anger, revenge, impulse, jihad,” the official added. The suspect, a 37-year-old local man identified as Espen Andersen Braathen, has been charged with five counts of murder so far, with additional charges expected to be brought against him shortly. (RT)