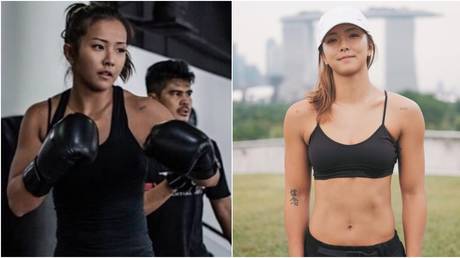 South Korean star Song Ka-yeon is eyeing a return to MMA six years after her first professional fights – and says ideals of beauty and the discrimination she suffered as a ring girl have fueled her relentless training.

Song was forced to train alone and spend time as an MMA ring girl as she tried to break into the sport as one of the first female fighters in South Korea before making the professional ranks in 2014.

Emerging from a volatile upbringing during which she never met her mother and her father died when she was a teenager, Song beat two men in her amateur kickboxing career before signing for a team who used her as a fill-in round card holder on one occasion when a ring girl dropped out at short notice.

That earned Song media attention and led to appearances on South Korean reality television and variety shows while she discarded plans to join the Korean military special forces in favor of pursuing her MMA ambitions.

Her first professional fight ended in a whirlwind victory but the consequences included death threats and the unwanted attentions of a stalker before she lost her second fight, in the same year, to a submission by a much more experienced opponent.

Now the fighter, known as ‘Deadly Beauty’, spends 12 hours a day in the gym with the Singapore-based Evolve Fight Team, who signed her after an impressive two-week trial and where she works alongside the likes of women’s MMA legend Misha Tate.

“Even though I had a good record in competitions, people wouldn’t give me credit for that. They just assumed I didn’t have the skills,” the 26-year-old told the SCMP.

“Funnily enough, the discrimination never bothered me. It fired me up and made me even more motivated to prove them all wrong.

“Most Asians love to achieve a lean, toned body and have fair skin but I was born with tanned skin and strong, bold legs. I don’t really care about what people think of me, because I know myself. I’m very feminine and my body isn’t a representation of that.”

Grounded in judo and jiu-jitsu, Song came second as a purple belt at the World No-Gi Brazilian Jiu-Jitsu Championship in California last year.

She has been forced to dismiss rumors that she had plastic surgery in the past after breaking her nose several times as a teenage fighter, and her following of more than 71,000 on Instagram has helped her to earn a sponsorship deal wth Adidas.

“I like how Singapore is unique,” she explained to the Strait Times after relocating. “There are a lot of different cultures.

“I train with people from Brazil, the United Kingdom, America and Thailand. The gym has produced a lot of champions.” (RT)