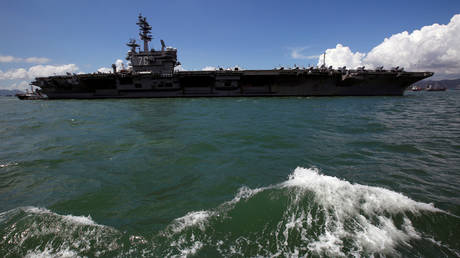 The attack that killed two people aboard an Israeli-operated vessel off the coast of Oman in the Arabian Sea on Thursday, is believed to have been a drone strike, US Navy’s Fifth Fleet, which operates in the region, has said.

American explosives experts, who have examined the Mercer Street product tanker, have discovered “clear visual evidence that an attack had occurred” on the ship, the Fifth Fleet said, in a statement on Saturday.

“Initial indications clearly point to a (drone)-style attack,” it stated, without elaborating on how such a conclusion was reached.

The statement by the US Navy has echoed earlier media reports, which cited an unnamed US official, who blamed the attack on a “suicide drone.”

The Liberian-flagged tanker Mercer Street, operated by the London-based Zodiac Maritime company of Israeli billionaire, Eyal Ofer, was hit late on Thursday northeast of the Omani island of Masirah, some 300 kilometers (186 miles) southeast of the country’s capital, Muscat. Two crew members were killed in the attack, one of them reportedly being a Romanian captain and the other confirmed as a British security guard. (RT)