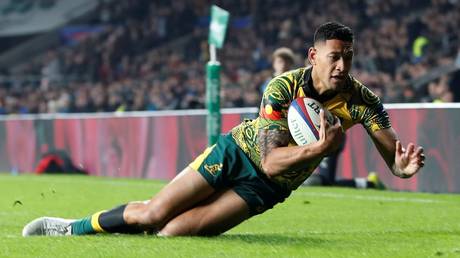 Australian rugby star Israel Folau’s future will be decided when he is asked to explain himself to a three-member panel ON May 4, following a controversial social media post in which he said that “hell awaits” gay people.

Folau, capped 73 times by his country, was roundly criticized for the April 10 post in which he said that homosexuals, as well as drinkers, liars, atheists and others, face eternal damnation for their sins in the post, which remains published on the player’s personal Instagram page.

It was announced in the aftermath that Rugby Australia would likely terminate his contract for both club and country, ending his hopes of participating in this year’s World Cup in Japan. While that hasn’t yet been made official, Wallabies coach Michael Cheika has stated that he would not select Folau while he is in charge of team affairs.

Those that are living in Sin will end up in Hell unless you repent. Jesus Christ loves you and is giving you time to turn away from your sin and come to him. _______________ Now the works of the flesh are manifest, which are these , adultery, fornication, uncleanness, lasciviousness, idolatry, witchcraft, hatred, variance, emulations, wrath, strife, seditions, heresies, envyings, murders, drunkenness, revelings, and such like: of the which I tell you before, as I have also told you in time past, that they which do such things shall not inherit the kingdom of God. Galatians 5:19-21 KJV _______________ Then Peter said unto them, Repent, and be baptized every one of you in the name of Jesus Christ for the remission of sins, and ye shall receive the gift of the Holy Ghost. Acts 2:38 KJV _______________ And the times of this ignorance God winked at; but now commandeth all men every where to repent: Acts 17:30 KJV _______________

The hearing, which is scheduled for May 4 and was requested by the player, will provide further clarity as to the player’s future and determine if Folau has any future in Australian rugby.

The 30-year-old is one of the sport’s most exciting attacking talents and was considered to be a crucial part of an Australia team who harbor ambitions of winning the World Cup. (RT)