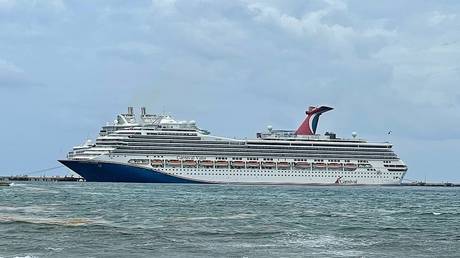 The man might have spent more than 15 hours alone at sea, a US Coast Guard official said  Cruise ship Carnival Valor. © Wikimedia

A lost cruise ship passenger was found alive in the Gulf of Mexico on Thursday, the US Coast Guard has announced. The man might have kept himself afloat for more than 15 hours, according to the service.

The 28-year-old disappeared on the Wednesday before Thanksgiving while aboard the cruise ship Carnival Valor.

Carnival spokesman Matt Lupoli told CNN that the man vanished when leaving the bar to use the restroom at around 11pm local time, hours after the vessel had sailed from New Orleans.

The passenger’s sister reported him missing at noon the next day, setting off a major search-and-rescue operation, which involved a Coast Guard boat, a helicopter, and several airplanes. The cruise ship had to change its course and retrace its route to support the effort, Lupoli said.

A bulk carrier finally spotted a man drifting alone about 20 miles south of the coast of Louisiana. According to a video released by the Coast Guard, the man was actively signaling for help with his hands. He was eventually rescued by an MH-60 Jayhawk helicopter at 8:25pm on Thursday. 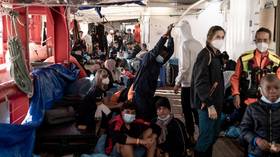 It was not clear how much time he had spent alone at sea. However, Lieutenant Seth Gross, a search and rescue coordinator with the Coast Guard, told CNN on Friday that the man could have been drifting for more than 15 hours, while the water temperature that day was just above 21 degrees C (70 F). He added that the drifter showed signs of hypothermia, shock, and dehydration, but was able to walk and communicate.

“The fact that he was able to keep himself afloat and above the surface of the water for such an extended period of time, it’s just something you can’t take for granted and certainly something that’ll stick with me forever,” Gross said, adding that the case was “unlike anything I’ve been part of” during his 17-year career.

“I think it kind of blows the norm, the normalcy, out of the water here, and really just shows the will to live is something that you need to account for in every search-and-rescue case,” he stated, calling the rescue “one of those Thanksgiving miracles.”

According to Gross, the rescued man gave “no clear indication” of why he fell overboard. (RT)