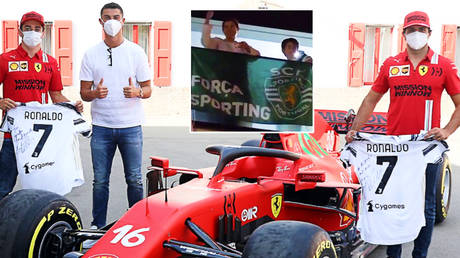 Cristiano Ronaldo could escape the embarrassment of missing out on the Champions League with ailing Juventus next season by joining Sporting Lisbon, his mom has said – and the star has posed with two F1 stars and a new Ferrari.

Speaking to fans from her balcony after the club where Ronaldo began his career won the Portuguese title for the first time since 2002, devoted Sporting fan Dolores Aveiro promised supporters she would bend her son’s ear about ending his frustrating time in Turin with a return next season.

The top scorer in Italian top flight Serie A still clearly has a strong emotional connection to the heavyweights in his homeland, posting a picture congratulating them on their new title to his hundreds of millions of social media followers in the aftermath of their decisive win over Boavista on Tuesday.

“I’ll talk to him to bring him back,” Aveiro told the celebrating mob outside her home, having posed in Sporting colors for her own Instagram following of more than 2.2 million.

“Next year he will play in Alvalade [Sporting’s stadium].”

Ronaldo spent a quarantine period in Madeira last year and has repeatedly been linked with a return to Sporting when his contract at Juve ends in 2022.

Although a switch to a relatively minor league in Europe might have seemed unlikely while the Italian giants were challenging for their domestic title, their dramatic decline could hasten his departure, with the Bianconeri looking increasingly unlikely even to qualify for next season’s Champions League following a dismal 3-0 defeat at home to AC Milan on Sunday.

Juventus won 3-1 at Sassuolo with the help of a goal from Ronaldo on Wednesday, but remain a point behind Napoli in the last Champions League qualification place with two games of the season remaining, one of which is at home to runaway champions Inter Milan on Saturday.

Wherever Ronaldo ends up next season, he will have a new $2 million Ferrari in tow, according to reports in Italy, after visiting Ferrari’s headquarters to meet Formula One drivers Charles Leclerc and Carlos Sainz, both of whom were given Juventus shirts.

Today we opened the doors of Maranello to a special guest. It was truly a unique experience for @Cristiano. #Ferrari@Charles_Leclerc@Carlossainz55pic.twitter.com/6OYCePGeMP

Club chairman Andrea Agnelli – now infamous among fans and at UEFA for his role as the vice-president of the doomed proposed European Super League – and the supremo’s cousin, John Elkann, who is the CEO of Exor and Ferrari, joined them.

One of Ronaldo’s familiar rivals, Milan striker Zlatan Ibrahimovic, is said to have already bought the limited edition luxury car that the Portugal captain snapped up while he was there. (RT)