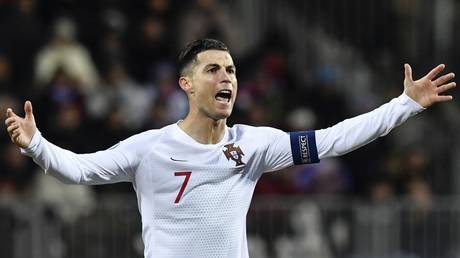 Cristiano Ronaldo took his international goals tally to 99 after helping fire his side to a 2-0 win over Luxembourg as Portugal qualified for the Euro 2020 finals, then criticized the media for their stories about his fitness.

Ronaldo netted late on to secure the victory to add to the hat-trick he struck against Lithuania earlier in the week as Portugual labored to victory on a pitch difficult surface at the Jose Barthel Stadium.

Also on rt.com 55 not out: Cristiano Ronaldo notches 55th hat-trick in Portugal’s 6-0 thrashing of Lithuania (VIDEO)

“It’s difficult to play on these pitches,” said Ronaldo.

“It was a potato field, I don’t know how teams of our level are supposed to play on these pitches.

“It wasn’t a good spectacle but we did our job… I’m looking forward to my fifth European Championship.”

Read more:   EU can order Facebook to remove 'hate speech' even if it's outside Europe, top court says in landmark ruling

Ronaldo’s two performances for Portugal came hot on the heels of a controversial week at his club side Juventus, where head coach Maurizio Sarri has looked to manage his star player’s niggling knee injury by cutting short his appearances with substitutions.

Ronaldo’s reaction to being withdrawn showed his frustration, as he hit the headlines after reportedly storming off after being withdrawn during Juve’s 1-0 win over AC Milan last Sunday. (RT)