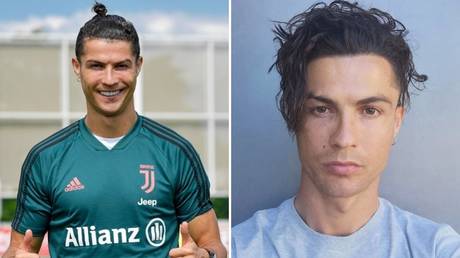 Cristiano Ronaldo has invited his hundreds of millions of fans around the world for their thoughts after posting a photo of himself with his latest hairstyle during a busy first full week back in training with club side Juventus.

The Portuguese superstar has thrilled fans with a series of snaps of himself running, smiling and enduring a rain shower at Juventus’s base near Turin as the Serie A leaders returned to a full week of training for the first time in more than two months.

He wore his hair in a small man bun as he spoke of entering “explode mode” while sprinting along the training pitch, having told fans to stay positive while Italy and the rest of Europe continues to gradually recover from the pandemic that has caused the suspension of professional football since mid-March.

In his new photo, Portugal’s all-time top scorer showed off what could be his first haircut since his girlfriend, Georgina Rodriguez, was filmed trimming his neck with a razor during the early days of their quarantine in Madeira.

Staring intently forward, the Juve star brushed most of his wavy locks to the right of his chiseled face, revealing a ring in his left ear.

He then asked fans “Approved?”, adding a thinking emoji in an invitation for feedback from admirers of the 35-year-old fashion icon’s latest look, which is reminiscent of the boyish style he was known for during his time at Manchester United.

“The old Cristiano is back,” declared one United fan, while another replied with commendable optimism: “He’s coming home next season.”

Others joked that Ronaldo’s slightly longer style was closer in look to US Women’s captain Megan Rapinoe, superimposed his fresh chop on to Juventus coach Maurizio Sarri’s head and compared the cut to late pop star Michael Jackson.

To prevent the spread of COVID-19 infection in the capital, intensified control and preventive measures…