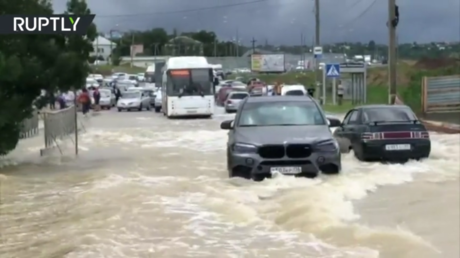 Authorities in Crimea declared a state of emergency on Thursday after heavy rain caused multiple cities on the Black Sea peninsula to be submerged under water, leading thousands of locals to evacuate their houses and seek shelter.

Some areas have seen almost two months of rain in just a couple of days.

The heavy rain first came down on the east of the peninsula, submerging Kerch, its third-largest city. According to local authorities, more than 200 houses have been flooded. Electricity has also been turned off, affecting thousands of residents and even leaving a local hospital to function without power.

All evacuated residents have been put up in hotels and recreation centers and will be provided with three meals a day, the local administration said.

Shortly after, flash floods started to hit another Crimean city, Yalta. Located on the coast, Yalta is a famous resort and is a popular tourist destination. According to the local head, Yanina Pavlenko, two rivers that run through the city center have burst through their banks, completely blocking the entrance to the city.

Read more:   NATO will respond to any attack on Poland or Baltics: Stoltenberg

Videos posted online show the extent of the flooding, including cars drifting down the road.

According to figures announced on Thursday, more than 100 Crimean transformer substations have been shut down due to damage to power lines and flooding of power facilities. Around 20,000 locals have also been left without drinking water.

The torrential downpours come after the peninsula has suffered for months from extremely low water levels, with many parts of Crimea having almost empty reservoirs. As a result, cities like Yalta and Simferopol had enforced water rationing, with taps only working for a few hours each day.

The water situation in Crimea deteriorated in 2014, following the reabsorption of the area into Russia. Once the region came under Moscow’s control, the Ukrainian government constructed a makeshift dam on the North Crimean Canal, which previously provided 85% of the local water supply. It connected the region to the River Dnieper, the fourth-longest river in Europe. (RT)