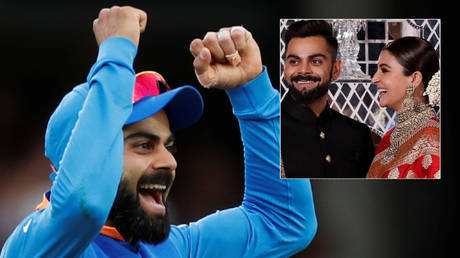 India cricket captain Virat Kohli has said he feels “grateful for all the love” after raising his bat to enjoy his latest century – becoming the first person from his sport and country to reach 100 million Instagram followers.

Cricket icon Kohli has joined an exclusive list of the feverishly-followed that includes the likes of football superstars Cristiano Ronaldo, Lionel Messi and Neymar and celebrities such as Dwayne ‘The Rock’ Johnson, Kim Kardashian West and Ariana Grande by earning the stratospheric following.

Kohli is the fourth most-followed athlete on the platform behind the ultra-famous footballing trio, and it is conceivable that no cricketer will ever match his status, with beloved former India skipper MS Dhoni way behind him on just over 30 million followers.

“You have made this journey beautiful,” Kholi told his vast fanbase, sharing a montage of moments from his life including his marriage to his wife – actress Anushka Sharma, who has more than 46 million followers – and shots of himself in the gym and embracing fans at matches.

A century on a different pitch 😎Captain Kohli becomes the first cricketer, and also the first person from India, to reach the 💯 million followers club on Instagram.🤩 KING for a reason 👑 #PlayBold#WeAreChallengerspic.twitter.com/geZ8RGOgHZ

“Feeling blessed and grateful for all the love,” he added, accompanying the clips with a dance-pop soundtrack. “Thank you.”

The 2011 World Cup winner is by far the most popular Indian on Instagram, ahead of Bollywood actress Priyanka Chopra, the wife of American actor and singer Nick Jonas who has more than 60 million followers. Kohli is also the first Asian to exceed 100 million.

Many of Kohli’s posts promote his WROGN fashion label, telling followers that the brand defies tags such as “Generation X” and has “styles to meet your mood”.

The 32-year-old promises that his One8 line of deodorants is “my style bottled” and a “secret to confidence” for customers, branded with his immaculately-groomed face.

Aside from pop star Grande, Kardashian, Kardashian and Ronaldo, who has the most colossal count of more than 267 million, only reality TV star Kylie Jenner and singer Selena Gomez currently have more than 200 million followers.

According to Hopper, Kohli charged up to $296,000 for sponsored posts on Instagram last year, while Forbes has estimated the net worth of the man who has around five million followers more than football giants Real Madrid and Barcelona to be around $119 million.

He is unlikely to catch Brazil hero Neymar, who has 147 million fans, but his following dwarves the figure held by the likes of footballers David Beckham and Zlatan Ibrahimovic and is 20 million ahead of NBA legend LeBron James.

Kohli’s next target will be to secure a series win over England when he leads his country against them in the fourth and final Test in Ahmedabad on Thursday.

“A century on a different pitch,” tweeted the Indian Premier League side he captains, Royal Challengers Bangalore. “King for a reason.” (RT)