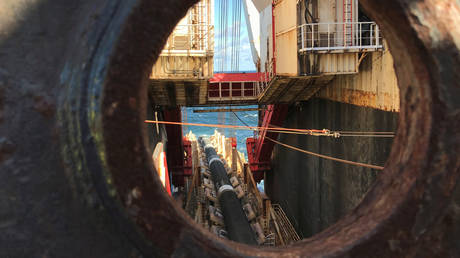 It is “rubbish” for Polish PM Mateusz Morawiecki to claim that the Nord Stream 2 pipeline, which will deliver a supply of cheap gas from Russia to the EU, is a “threat” to European energy security, analyst John Laughland told RT.

Morawiecki said at a press conference on Tuesday that the pipeline, currently under construction, posed a “threat to energy security” in the Baltic region. Poland and the Baltic states have consistently complained that the project affords Russia too much leverage over Europe’s energy supply, despite the fact that EU heavyweight Germany has backed the project, touting its economic benefit.

Also on rt.com Pipeline to bring Russian gas to Europe is three-quarters complete

“The opening of a new pipeline does not threaten energy security,” international commenter John Laughland told RT, explaining that Russia was not going to prevent Europe from going elsewhere for gas if it wanted to.

“Russia provides gas in a market – and Europe is welcome to open other sources of gas through the Black Sea or Turkey or wherever, if it wants to.”

“The idea that this is a threat to energy security is crazy. There are many other sources of energy apart from gas and the sources of gas are themselves numerous,” he added.

Europe is, of course, interested in diversifying its energy sources and Moscow would not have stopped it, for example, from building the failed Nabucco Pipeline through the Black Sea, he said. Nabucco would have run from the Turkish-Bulgarian border to Austria, but never succeeded due to lack of investment as Iran, Turkmenistan, Egypt and Iraq all pulled out of the project, with Azerbaijan finally rejecting the idea.

Also on rt.com Europe’s full-blown Stockholm Syndrome in face of US bullying

Speaking at the same news conference, Lithuanian PM Saulius Skvernelis described Nord Stream 2 as a “geopolitical project with no economic justification.” That was an ironic comment, Laughland said, because “the truth is that Mr. Skvernelis’s own statements are geopolitical and make no economic sense.”

It is “crazy” for Skvernelis to suggest that Germany supports the Nord Stream 2 project for geopolitical reasons, when in fact it is “precisely for economic reasons” that Berlin wants it to continue.