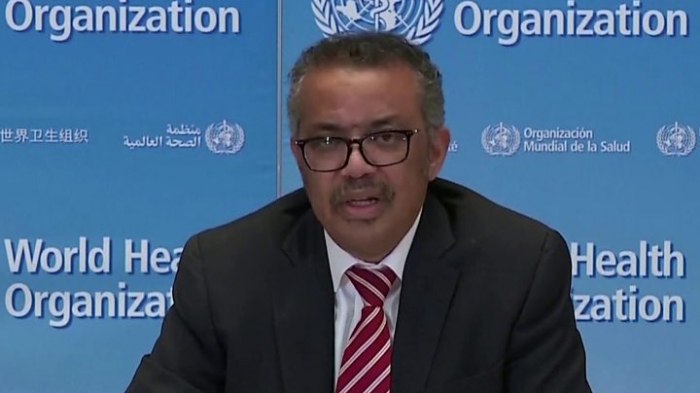 The head of the World Health Organization (WHO) has urged unity, as the agency comes under continued fire from US President Donald Trump, BBC reported.

Speaking on Wednesday, Director-General Tedros Adhanom Ghebreyesus defended the WHO’s work and called for an end to the politicisation of Covid-19.

Mr Trump said he would consider ending US funding for the UN agency.

He accused the WHO of being “very China-centric” and said they “really blew” their pandemic response.

Dr Tedros has now dismissed the comments, insisting: “We are close to every nation, we are colour-blind.”

After first attacking the WHO the previous day, President Trump renewed his criticism at his news briefing on Wednesday, saying the organisation must “get its priorities right”. He said the US would conduct a study to decide whether it would continue paying contributions,

Also answering questions at the briefing on Wednesday, US Secretary of State Mike Pompeo said the administration was “re-evaluating our funding” of the WHO, adding; “Organisations have to work. They have to deliver the outcomes for which they were intended”.

Covid-19 first emerged last December in the Chinese city of Wuhan, which has just ended an 11-week lockdown. An advisor to the WHO chief earlier said their close work with China had been “absolutely essential” in understanding the disease in its early stages.

Mr Trump’s attacks on the WHO come in the context of criticism of his own administration’s handling of the pandemic.

What did the WHO chief say?

“Please, unity at national level, no using Covid or political points,” Dr Tedros said. “Second, honest solidarity at the global level. And honest leadership from the US and China.

“The most powerful should lead the way and please quarantine Covid politics,” he appealed, in comments seen as a response to Mr Trump, who said on Tuesday the WHO appeared to be “very biased toward China”.

The US is one of the agency’s largest voluntary funders, with WHO data suggesting they contribute 15% to its overall budget.

On Wednesday Dr Tedros played down that financial threat, saying he believed that US funding would continue.

United Nations Secretary-General António Guterres had earlier added his voice to the defence of the organisation. He described the outbreak as “unprecedented” and said any assessment of how it was handled should be an issue for the future.

“Now is the time for unity, for the international community to work together in solidarity to stop this virus and its shattering consequences,” he said.

French President Emmanuel Macron also reportedly offered his support to the WHO in a call to Dr Tedros on Wednesday. “He reaffirmed his trust, his support for the institution and refuses to see it locked into a war between China and the USA,” a French presidency official told Reuters news agency.