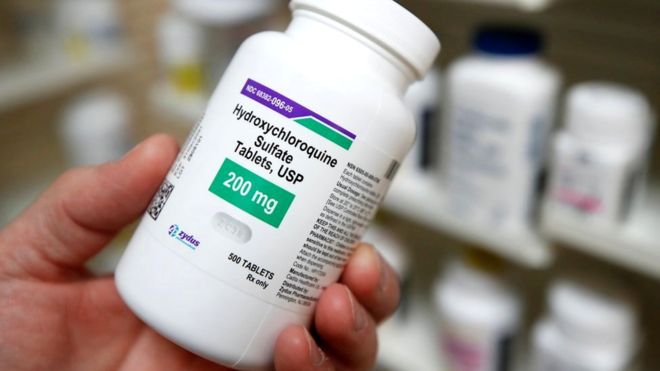 Emergency use of the anti-malaria drug hydroxychloroquine as a treatment for coronavirus has been withdrawn by the US Food and Drug Administration (FDA), according to BBC News.

The FDA said that new evidence from clinical trials meant that it was no longer reasonable to believe that the drug would produce an antiviral effect.

President Donald Trump later defended promoting the use of hydroxychloroquine as a treatment of Covid-19.

In March, the FDA granted the emergency use of the drug for some serious cases.

But on Monday, the agency said clinical studies had suggested that hydroxychloroquine was ineffective in treating the deadly virus and failed to prevent infection among those exposed to it.

Responding to the FDA’s decision, Mr Trump said that he had previously taken the drug preventatively with no side effects.

“I took it and I felt good about taking it,” he told reporters on Monday, adding: “I can’t complain about it, I took it for two weeks, and I’m here, here we are.”

The 74-year-old president said that many people had told him it had saved their lives.

In May, Mr Trump revealed that he was taking the drug after some people in the White House tested positive for coronavirus.

His comments about hydroxychloroquine became the subject of widespread speculation online and controversy within the scientific community about the potential benefits and harmful effects of the drug – along with the related drug, chloroquine.

Trials around the world were temporarily derailed when a study published in The Lancet claimed the drug increased fatalities and heart problems in some patients.

The results prompted the World Health Organization (WHO) and others to halt trials over safety concerns.

However, The Lancet subsequently retracted the study when it was found to have serious shortcomings and the WHO has resumed its trials.

The Listing Committee of the Baku Stock Exchange (BSE) has included the interest-bearing, unsecured, book-entry…