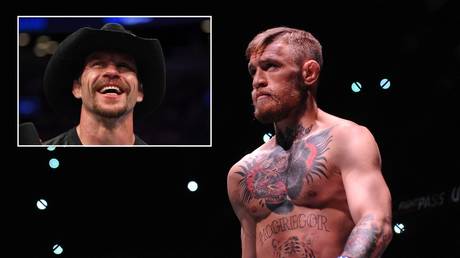 Conor McGregor’s manager Audie Attar has vowed that the Irishman “is not slowing down” as he gave an update on his client’s UFC comeback in January, with Donald ‘Cowboy’ Cerrone the man he is most likely to face.

McGregor announced during a press conference in Moscow last month that January 18 was the date being targeted for his eagerly-anticipated return to MMA.

Cerrone has been talked about as McGregor’s opponent for months, with ‘Cowboy’ himself lobbying for the fight to take place.

UFC president Dana White previously stated that a deal was far from being done and that Cerrone even messaged him querying the rumors that he would be McGregor’s next dance partner.

Without naming names, Attar has confirmed that a deal could come in the next few weeks, with “talks progressing” ahead of what would be another monumental return to the Octagon for ‘The Notorious’.

“I would say that talks have been progressing,” he told the South China Morning Post.

“We’ve met them, we’re in close communication with them. I would hope that an announcement could happen in the coming weeks, but at the end of the day, it’s still a work in progress.”

Also on rt.com Yesterday’s ‘double champ’: 3 yrs on from Conor McGregor’s signature victory, it remains his most recent win

McGregor’s last outing came at UFC 229 in October 2018, where his bitter feud with Khabib Nurmagomedov came to a halt after the Dagestani submitted his rival with a neck crank in the fourth round.

Since then, Nurmagomedov has defended his title against Dustin Poirier, while McGregor has had his fair share of alleged legal troubles to deal with.

But Attar has had it clear in his mind since McGregor’s loss to ‘The Eagle’ that there was no way he would bow out from a storied career in MMA with a whimper. (RT)