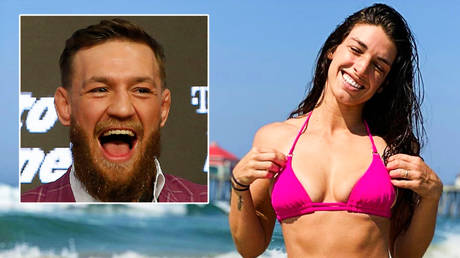 Conor McGregor has reacted to footage of UFC strawweight Mackenzie Dern working out in a gym and called for a trilogy fight between Luke Rockhold and Michael Bisping, the former champ who cackled with his ex-opponent in the clip.

Fighter-turned-pundit Bisping seemed to have emphatically buried the hatchet with the man who was once his fiercest rival, losing to Rockhold by submission in Australia in 2014 before providing a huge shock by knocking the middleweight champion out to take his belt in 2016.

As he prepares for a likely return to the octagon for the first time since 2019, Rockhold is now training in the RVCA gym in California, which is run by Jason Parillo – the man who trained Bisping to upset Rockhold in their second scrap.

“Bumped into some old friends at RVCA today,” tweeted Bisping, sharing a video that amassed well over 100,000 views within hours.

Bumped into some old friends down at @rvcasport today pic.twitter.com/mAl3KbqT2G

“Come on Luke – give me a shout-out,” he added in the footage, as he circumnavigated the space to alight upon Rockhold going at a bag. “Come on, buddy.”

Rockhold joined in with the fun, laughing as he turned to greet Bisping and, later, even hugging the slugger he once sought to destroy.

While many fans were entertained by the sight of the two adversaries at close quarters again, there was another surprise in store when ex-champion Conor McGregor replied by asking when they would fight again.

That sent fans into a frenzy, with many welcoming the return of McGregor’s unpredictable provocative tweets and others joking that his partner, Dee Devlin, would not be impressed by his apparent interest in Dern.

“Hitting on married women,” said one in a somewhat far-fetched interpretation of a namecheck that McGregor would undoubtedly have known would produce a response.

Dern’s husband, professional surfer Wesley Santos, was involved in a high-profile altercation with her former coach, Juan Gomez, that led to her training at RVCA.

A mysterious disagreement between the pair led to the jiu-jitsu specialist changing trainers and gyms, and she admitted at the end of last year that seeing stars including Bisping and Rockhold at work in the facility improved her motivation to train.

She has also named former two-weight king McGregor as the fighter whose trajectory she wants to emulate.

“If I can win two belts by 27, I’ll stop earlier,” Dern told MMA Fighting in 2017, although she will fall short of that timeframe when she turns 28 later this month.

I spell it cheques

“I want to win the belt and defend it but I want to know the right time to stop fighting.

“I’ll try to follow McGregor’s footsteps. The best in the world always have goals to achieve.”

Temperamental McGregor could not resist replying when a fan took a dig over his defeat to Dustin Poirier in January, telling the Irishman to “check the leg kicks” being used by the fighters around the gym during the informal tour provided by Bisping.

“I spell it cheques,” retorted McGregor, who was pleased enough with his pun to repeat the joke shortly afterwards, tweeting: “Guys, I’m going to cheque the leg kick.” (RT)