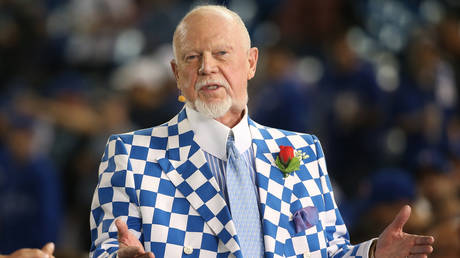 Russian hockey club Dynamo Moscow have offered disgraced Canadian announcer Don Cherry a job as an analyst that “can talk whatever he thinks” after he was fired for making “divisive” comments about immigrants on air.

The 85-year-old was fired from his role on Sportsnet’s highly-rated ‘Coach’s Corner’, a stint he began in 1982, after he made comments that were deemed inappropriate about immigrants’ alleged attitudes to wearing poppies ahead of Remembrance Day.

Referring to them as “you people”m Cherry criticized an apparent lack of respect for the tradition, which prompted an angry backlash and claims of “racism”.

But Hockey Club Dynamo Moscow, one of Russia’s and the Soviet Union’s most successful clubs, made Cherry an offer that seemed to press all of the eccentric host’s buttons.

Read more:   China's economic growth slowest since 1990 amid trade war with US

“Hey, Don Cherry. We heard that you were fired. It’s not good!,” the club tweeted on Tuesday.

Hey, Don Cherry @CoachsCornerDC. We heard that you were fired. It’s not good!

Come to Russia, we need an analyst for Dynamo TV who could talk whatever he thinks. We love old soldiers. And we will make a nice suit!

We hope you agree. #WeAreDynamopic.twitter.com/5WiwikHZgQ

“Come to Russia, we need an analyst for Dynamo TV who could talk whatever he thinks. We love old soldiers. And we will make a nice suit! We hope you agree.”

Dynamo’s tweet should perhaps be taken with a pinch of salt, as it was probably not posted without irony. Cherry has been known for his prolific putdowns of European and Russian NHL players, as social media users were quick to point out with the same sarcastic angle.

“Is this Hockey Night in Russia?”
-Don Cherry, 1996 pic.twitter.com/zz8wJ4EorI

If there’s anything Don Cherry is known for, it’s his love of Russians.

Don Cherry, the lover of Russia and other European hockey countries

After leaving the show, former Boston Bruins star Cherry has since remained unrepentant in his response to the fallout, telling The Toronto Sun: “I know what I said and I meant it. Everybody in Canada should wear a poppy to honor our fallen soldiers.”

However, he has expressed some regret over the wording used in the incident, also coneding that he should have used “everybody” instead of “you people”. (RT)