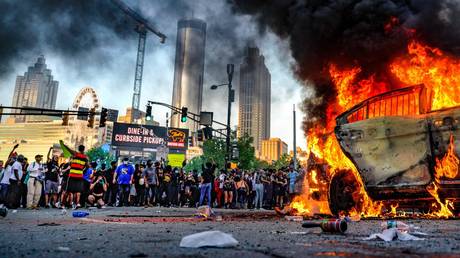 Protests in downtown Atlanta after the death of George Floyd. © Anadolu Agency via Getty Images

The College Football Hall of Fame was damaged and looted in the riots which hit downtown Atlanta on Friday as part of the wave of unrest after the police killing of George Floyd.

Riots broke out across the US in the wake of Floyd’s death, but Atlanta was among the areas worst hit as a state of emergency was declared and the National Guard called in.

The destruction included damage to the College Hall of Fame, which had its windows smashed and gift shop raided.

It is said to be unclear whether the museum section of the building was affected by the vandalism.

A very tough night for downtown Atlanta. This is the College Football Hall of Fame. #AtlantaProtestpic.twitter.com/K7vt95n8lV

“There has been looting at the College Football Hall of Fame… and many other businesses.

“We are grateful for the assistance being provided by multiple local and state law enforcement partners as we work to minimize the damage being caused by these individuals and to restore order in our city.”

Also on rt.com ‘Nothing else we can do to let our voices be heard’: Protesters say violent riots the only way to get George Floyd justice

The death of 46-year-old African American Floyd in Minneapolis has sparked peaceful protest but also violent outrage across the country.

As well as the College Hall of Fame building in Atlanta, demonstrators smashed police cars and targeted the CNN headquarters in the city. (RT)

Rapid spread of the coronavirus poses a major challenge to the whole humanity, since the…